I have a small collection of slide rules. Slide rules, which first made their appearance in the 1620s, was the calculator before electronic calculators became prominent in the 1970s.

Having been born three years after the slide rule disappeared from the mainstream I first came across slide rules for the first time when I found my grandfather's book "The Slide Rule and How To Use It". It took me a while to get an understanding how they work, but I think I have a beginner's idea how slide rules work, or getting used to the idea of logarithmic scales.

The scales I know about are:
C and D: Used for multiplication and division
CI and DI: Reciprocal of the C and D scales
A: the square of scale C and D
K: the cube of the scale C and D
L (and LL): logarithmic scales
S: sine
T: tangent

I think the LL scale is a natural logarithm/exponential scale.

Thank you William Oughtred for inventing the slide rule.

Here is my collection: 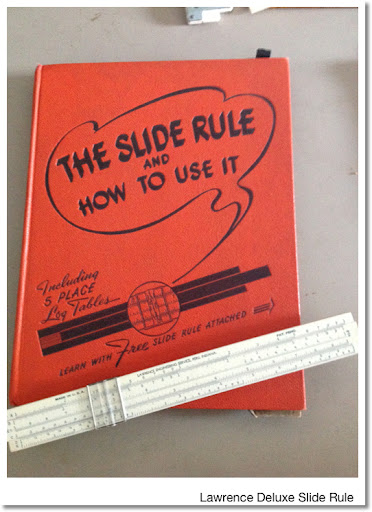 Lawrence Deluxe Slide Rule with the book it came with: "The Slide Rule and How to Use It".

This what I found in the garage. Now this sits in my bookshelf.

Keuffel & Essel Co. Model 4098A (I think I am correct on the model number)

I picked up this slide rule last year at a swap meet in Azusa for two bucks. What is interesting about this slide rule is that it is six inches long, has a five inch/13 centimeter ruler in the back. The middle part of the scale is removable to reveal the S, L, and T scales in the back.

I bought this slide rule in Pomona several months ago for $7. Unfortunately, the case that it came in crumbled. It now has a towel as a case.

My dad and I went to the swap meet at Glendale College this morning. Pretty good swap meet despite it being on the small side. A lot of high-end stuff. I got this slide rule for $7.

I like to work with slide rules every once in a while - fun!