9/1/2016:  Some users have downgraded back to 8151 and may had problems with the touch screen.  HP put the version 10077 back up so these users can restore their calculators.

If you have not used version 10077 yet, the writer of this blog assumes no warranty or risk.

It is advised that you use the Internet Explorer browser to download the updated firmware.    This new firmware for the HP Prime (April 2016) provides new functionality and corrects a lot of issues.  A more complete list is included in the zip file, but let’s go over some highlights, which include creating backup files and jpg files (see towards the end):

Creating and Restoring Backups Directly on the Calculator

This maybe a first for graphing calculators, but you can create backup files directly on the HP Prime.  Press [ Shift ], [(toolbox)] (Mem) to access the memory list.  Backups is now listed as one of the memory types.  You can create a new backup, restore an old one, or delete old backups. 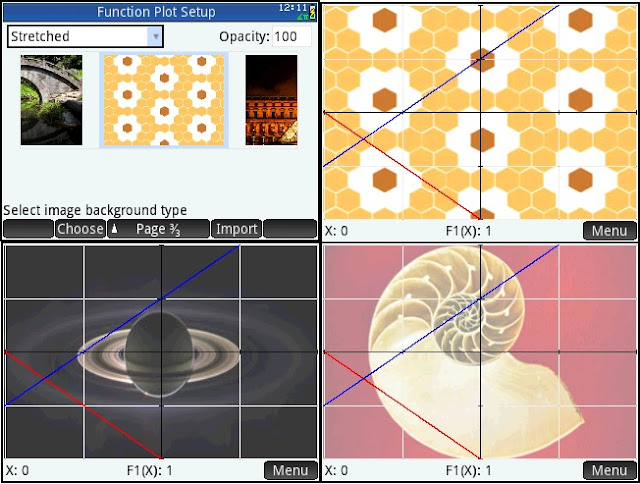 The Prime can now have a picture as a background on the Plot Screen.  To set a picture, press [ Shift ], [ Plot ] (Plot Setup), and scroll to Page 3 of the options.  Pictures can be stretched, centered, or plotted on a specific (x,y) position.  Of course, you can choose No Background. 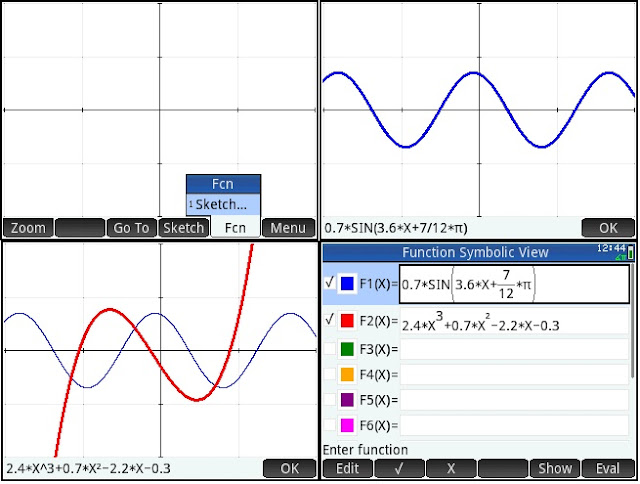 You can now draw certain classes of functions directly on HP Prime screen without entering an expression on the Symb page.  On the Function App’s Plot screen, select the soft key (Fcn), then Sketch.   Draw the function (by touch) on the screen.  The Prime attempts to fit a common equation to the curve in which you may be prompted to selected between two or three functions.  If the function is accepted, it is added to the Function list on the Symb screen.

You can draw a fit in a similar matter of the Statistics 2 Var app.  The difference is that you must have data in the Num database (and able to be plotted). 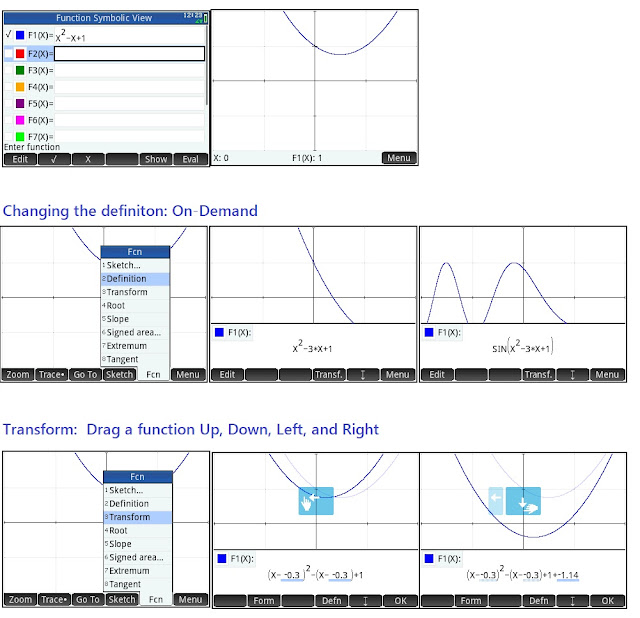 The (Fcn) soft menu on the Function’s Plot screen has two additional functions:

*  Definition:  You can change the definition of a function by tapping the bottom of the screen and editing to the screen.  This command is also given in the Advanced Graphing App.

* Update (5/1/2016).  In transformation mode, you can use pinching and "reverse"-pinching motions to compress and widen the function.  Thank you to Eried of HPMOC Forums.

*  Also thanks to a reader (no name was given) that you can also press the (Form) softkey during Transformation mode to change the form of the function.  (Refer to the comments below)

The UNION function (Toolbox, Lists) of two or more numbers/lists returns a list of all numbers listed without duplicates. 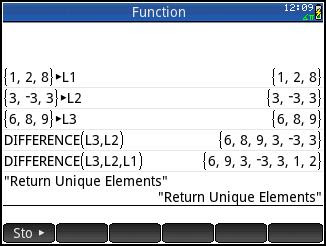 The DIFFERENCE function (Toolbox, Lists) returns all elements that are present in one and only one list. 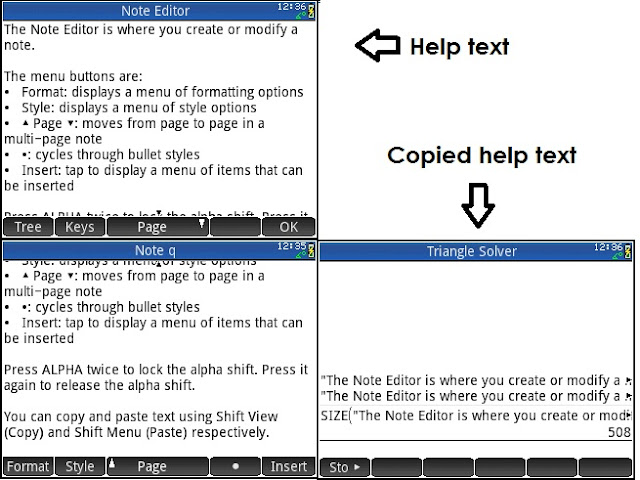 You can now copy and paste the help text.  The entire help text for that page is selected.  For the moment there is no way of selecting only parts of the help text.

CHOOSE is now available in the Spreadsheet App 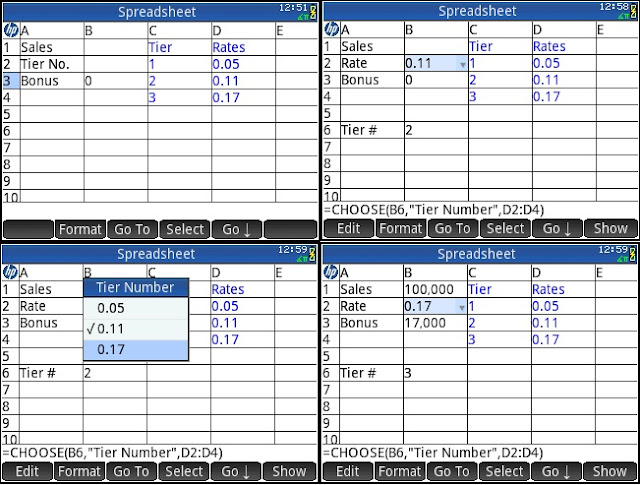 The CHOOSE command is available in the Spreadsheet App.   The syntax is:

=CHOOSE(cell where to store the index number, “title”, range of data)

In the example (see the picture listed) above, if have in Cell B2: 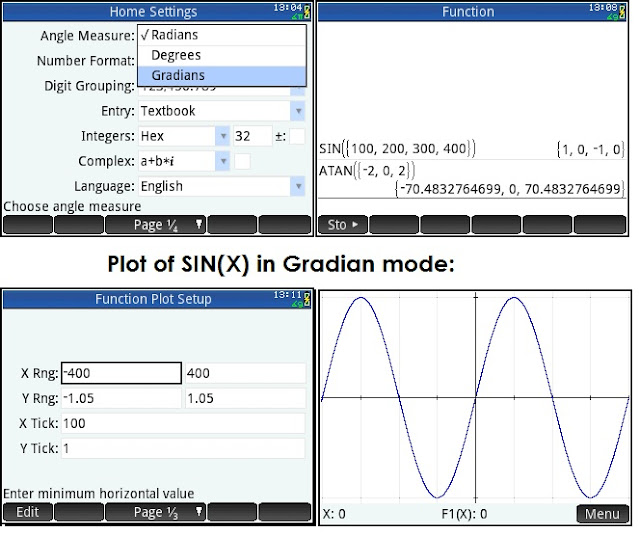 When the HP Prime is in Gradian angle mode, the angle indicator will have a “g” on the top right corner of the screen.  Gradian mode sets the system variable HAngle = 2.
Just a note, be careful when using ARG in Gradian mode when the real part is negative in Home mode.

Σ can now use local variables in Programs 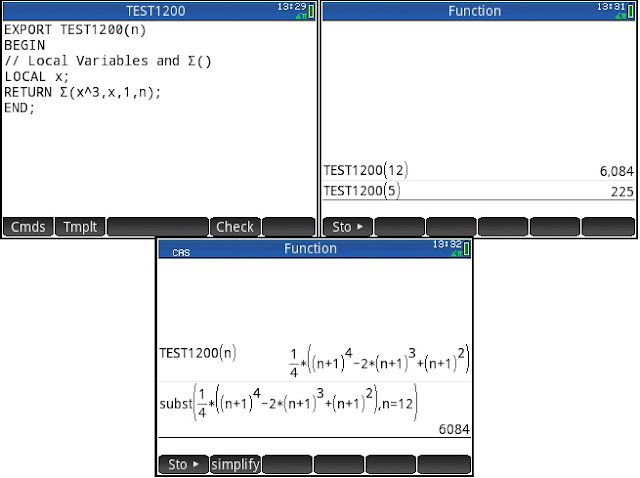 CAS.int can now use local variables in Programs 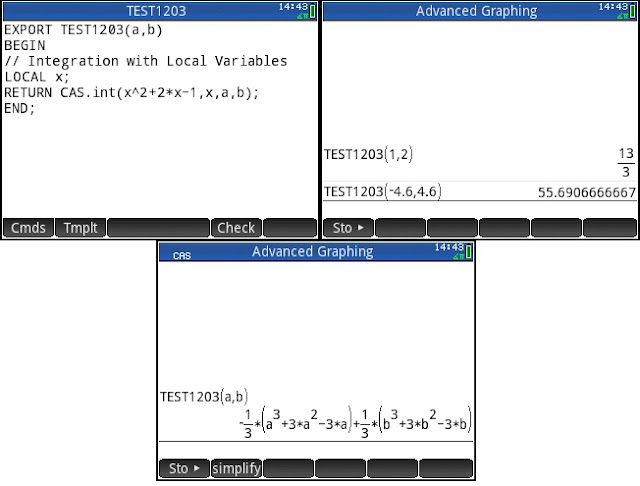 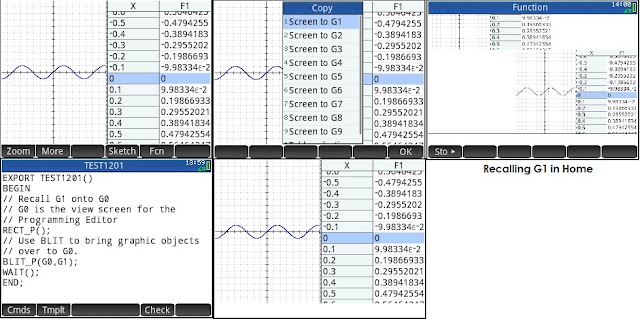 In programming mode the display is Graphic Object 0 (G0).  Use BLIT to copy the temporary graphic object (G1-G9) to the display (G0). 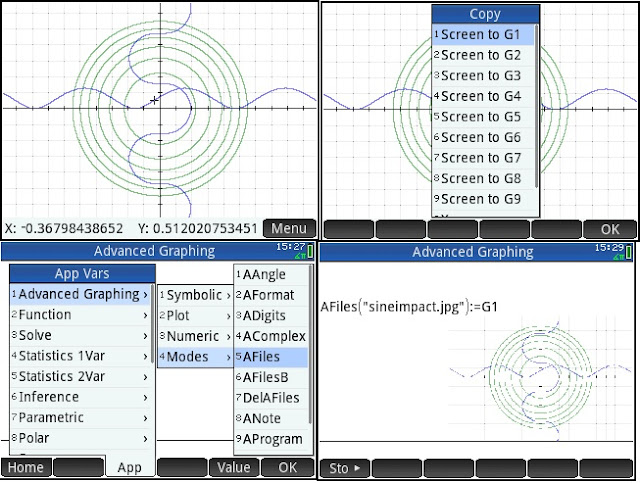 1.  Bring up your image you want to create as a .jpg file.  Copy it to a temporary graphic object G1-G9.  Please remember what App you are using it will be important.
* Plot Screen:  Press [ Shift ], [ View ] (Copy).
* Program:    Use the BLIT to store G0 (the screen) to another graphic object.  Make sure you store the image into a temp graph object G1 – G9.
2.  Back at home, press the (App) soft key, find the app you are working with, select 4. Modes, and select AFiles.
3. As your argument, type the string “filename.jpg”. Then use ≔ outside of the AFiles and type the graphic file you are using.  For example:  AFiles(“sineimpact.jpg”)≔G1 stores the image stored in G1 to the jpg file sineimpact. 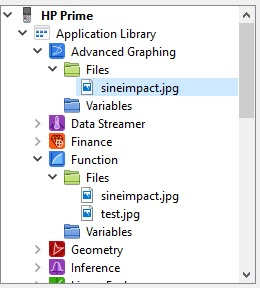 4.  Opening the Connectivity Kit, you can see your file stored under the designated Application.  Note that if you want to use save the graphic object on a PC/Mac, you’ll have to use other means since there is currently no direct export function.  (Two ideas: Open the file and save it from the computer’s engine or if the graphic object was created by the emulator, open it and save it as a screen shot)

That is just some of the improvements and additions to Version 10077.  Download it, as all my programs for the HP Prime will use this firmware version until further notice.