HHC 2018 took place on September 28 and 29, 2018 in San Jose, CA.   If you have not gone to a HHC conference, and you love calculators and math, I strongly encourage you to attend.  The conferences take place typically around the latter half of September.

There will be videos from the conference in the upcoming weeks from hpcalc.org.  The following is a short summary of the talks presented in the conference.

I am under a non-disclosure agreement, which means that I will not be able to discuss certain details of the conference due to confidentiality.

Chrapkiewicz takes us on a history of Silicon Valley.  Despite what most people believe, which included be, the term Silicon Valley did not originate int the 2000s.  The term goes back to Don Hoefler, who first used the term in his article "Silicon Valley in the USA" in 1971.

Some places of interest that Chrapkiewicz highlighted are:

* A plaque and semiconductor display dedicated to the Schokley Semiconductor Laboratory at 391 S. San Antonio Rd.  Even though Dr. Shockley of Bell Labs started the research into silicon devices, he had an infamous reputation, resulting of eight members of his team left Shockley for the competitor Fairchild Semiconductor in 1957.

Chrapkiewicz also highlights his career and how it lead him to Silicon Valley.  He now works in Audio & Acoustic Research at Ford Motor Company.  His current office is located where the Hewlett Packard sales and service was once located.

Shammas describes several methods to obtain the roots of the following polynomial equation:

where a_i are all real coefficients.

The properties known as the Vieta formulas are to be optimized to find the roots of p(x):

One method described is the Quasi Lin-Bairstow Method which reduces p(x) by the form:

q(x): a quadratic polynomial in which roots are obtained from p(x) at each reduction

r(x): a linear equation that servers a remainder

Another method described is a Durand-Kerner algorithm, which uses four equations for iteration to find real and complex roots for p(x).  The method is found to be effective in finding roots of polynomials with both real and complex coefficients.

Côté prepared an HP-IL Compendium, consisting of any information related to the Hewlett-Packard Interface Loop (better known as the HP-IL).  The Compendium took six months to complete.

The HP-IL is an interconnection bus that was in the use during the 1980's and 1990's, and serviced the HP-41C, HP-71B, HP-75, HP-80, and general computers.  The peripheral types covered by the Compendium includes controllers, storage devices, printers, plotters, display devices, modems, and other control and specialty devices.

Dalrymple introduces a 41C Flexible Hardware Module (FHM), which is a circuit board to be placed in a regular HP 41C.  The module is an upgrade which can facilitate the installation of the time module, extended memory modules, extended function module, service and printer service module, and MLDL (Machine Language Development Lab).

The module is a Lattice iCE40Ultra FPGA, which can be flashed once.  However, the FHM board contains a 32768 Hz oscillator and additional memory resources due to efficient use.

Also introduced is the GNSS module, a 4K ROM module, also made to fit in a HP 41C.  This module gives additional functions, essentially turning the 41C into a GPS system.  You can get the altitude, latitude, longitude, plus display format options and other ROM option commands.

Wright presented a collection of old calculator ads from 1972 to 2010.  Wright also highlights the calculator lineup of Unisonic, particularly from the 1970s:

*  Unisonic 1040:  four-function calculator with a GPM button.  Noted for it's white, blue, and orange keys on a metal case.  It ran on either AAA batteries or a 9 volt battery.

* Unisonic CS-14:  This is a large four-function calculator with several metric-US conversions listed at the bottom.

* Unisonic CASINO 7 and 21 Jimmy The Greek:  These are both four function calculators with a blackjack game.

* Unisonic 796:  A scientific calculator with a shift key only for the inverse of the trig functions (asin, acos, atan).

* Unisonic 799:  A simple scientific calculator.  Your mileage may vary depending on which version of the 799 due to some of the productions had difficult to read key markings.

It was seeing Unisonic calculators in K-Mart stores in Nashville is what inspired Wright to get into calculators.

Cochran tells the story on how the HP 35 calculator came to be.  Cochran is loved in the HP calculator community.  He is fundamental in the development in both the HP 9100A and the HP 35, along with HP 65 card reader, the 204 oscillator, and the 3440 digital voltmeter.  For what the HP 35 brought to the engineers, scientists, and math enthusiasts in 1972, the first handheld calculator to have trigonometric functions, logarithmic functions, and power and root functions, it was no wonder why people lined up to pay $395 for this marvel.

The HP 35 was awarded the IEEE Milestone in Electrical Engineering and Computing Award in 2009.

Gross and Hayden went through the process on how the HP 15C Advanced Functions Handbook was recreated.  This mainly involved scanning images, recreating the examples, creating keyboard fonts, and lots of proofreading.  This results are outstanding and beautiful.

Jim Johnson - What was the first Personal Computer?

Jim Johnson takes us through a time line and determines what was the first personal computer.  Some of the criteria Johnson defines include:

* The computer must be digital and programmable.

* The computer must be commercially available or be readily assembled via a kit.

* The computer must be ready to be use after the basic instruction manual.

Why the Simon?  The Simon was a computer kit first described in the 1949 book "Giant Brains, or Machine That Think".  The book provided plans to build the Simon computer, and influenced further development of interactive computers.

Johnson ended his presentation with demonstrating his Altair 8800.

Richard Nelson is a fan of significant digits, especially when it comes to working with analog meters and digital meters.  Nelson states that significant digits are needed and are useful for digital specifications, consistent accuracy, scientific calculations, and reporting results in technical publications.

What are significant digits?

*  Any zeros between non-zero digits

To my knowledge, no calculator currently has a significant digits rounding mode.

All commands dealing with the printer were required to be terminated by a semicolon, with labels ending in 03h.  The text is ASCII.  Furthermore, the plotting space is limited by hard-clip limits and soft-clip limits, the latter determined by the user.

Chrapkiewicz tests the audio performance of the HP 48, HP 48GII, and HP 49g+.  He states that the original beeper on the HP 48 is louder than later calculators, however, the tones were more sinusoidal on later models.

*  Signals can be characterized by a linear combination of harmonics, such as a Fourier Series.

* The microprocessor's clock rate determines the audio frequency of the calculator.

* The calculator's beeper can be use to set up tones that beep on the hour, minute, even set up alarms.

*  The Bifurcation diagram, set up by the equation x_(n+1) = (x_n)^2 + c where x_0 = 0, is a visualization of how tones bifurcate with each successive calculation.  With this, as c decreases, particularly towards 440 Hz, the successive tones get more chaotic.

Side note:  I wish the HP Prime had a beeper, it was one of the things that made HP calculators unique.

Shammas explores an alternate algorithms for numerical integration, the HFVQI (Half-Function Value Quadratic Integration).  This involves calculating the midpoint between the integral limits and performing an inverse Lagrangian interpolation using the following points (a, f(a)), (b, f(b)), and (c, f(c)), where c = (a + b) / 2.  An advantage of this method is that you can reduce the number of intervals needed to reach good accuracy.

For detailed formulas, click here for the Shammas' article:  http://www.namirshammas.com/NEW/hfvqi.pdf

Maag also had to reconfigure the display, which proved to be a challenge.  Each character has 7 LED segments.  Some letters ended up a capital letters while others were lower case.  Below is a sample. 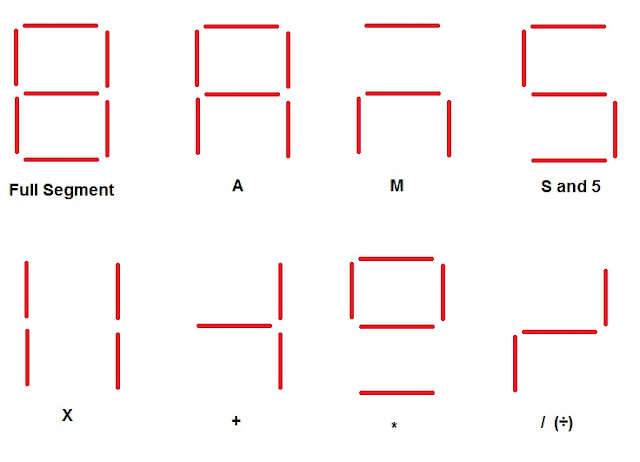 I won his RPN-1250 as a door prize, it's truly one of a kind, and I plan to post more details about it in a future blog post.

Door Prizes Won from the Conference

HP 11C:  I won it because I won a programming contest! 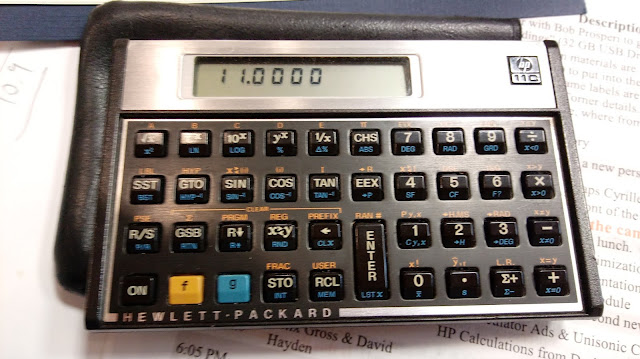 RPN 1250:  One of a kind, re-purposed calculator made by Benoit Maag. 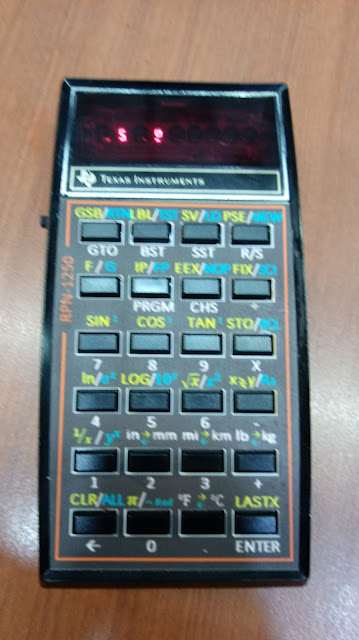 All original content copyright, © 2011-2018.  Edward Shore.   Unauthorized use and/or unauthorized distribution for commercial purposes without express and written permission from the author is strictly prohibited.  This blog entry may be distributed for noncommercial purposes, provided that full credit is given to the author.  Please contact the author if you have questions.
at October 06, 2018