The programs can create a sparse matrix, a matrix where most of the entries have zero value.  There are several ways to represent sparse matrix in a shortcut form.  The most straight forward way is the COO (row-column-value) representation.

Making the Discrete Transforms and Back Again

Given a set of numbers, either real or complex:

can be transformed using a discrete transform by the sum:

We can do the reverse:

On the Casio fx-CG50, lists start with marker 1 instead of 0, so a slight adjustment in the programs below are needed. 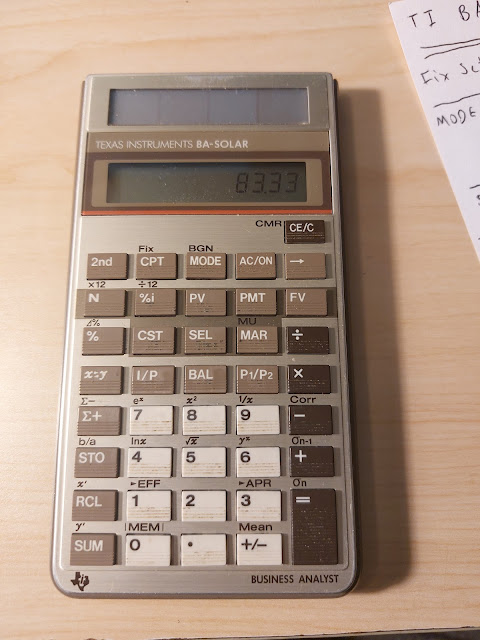 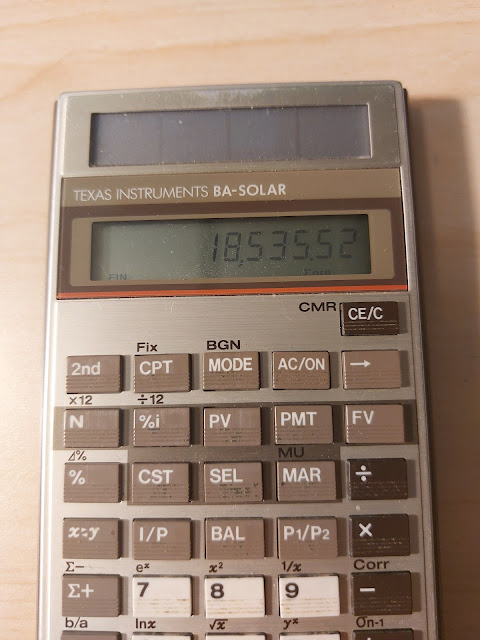 The [ MODE ] key is used to toggle between three modes:

The current cash flow convention is not used, instead the following equation is (I think) used in solving time value of money calculations:

We also have amortization functions:

BAL:  balance after any payment

I/P:  interest and principal at any payment

The BA-SOLAR (and the later BA-35 SOLAR) has both single variable statistics and linear regression.

In linear regression, use the [x<>y] key to change between x and y.   The key will also be used to switch between results.

Prediction values can be calculated with x' and y'.

Functions Available in All Modes

This is a great basic financial calculator.  I have both the BA-SOLAR and BA-35 SOLAR.   To be honest, I like the keyboard of the original BA-SOLAR better, the keys feel a bit more solid and responsive.  Even though they are no longer in production, the BA-SOLAR is still reasonably available on sites such as eBay and other online stores.

I'm going to start with a demonstration on how to calculate integrals with the HP 33S through the equation list.  The steps will be similar for the HP 32SII and the later HP 35S.

Use lower limit as 0.

Use lower limit as 0.

Given the height (H) in meters, the following can be estimated:

The value of Legendre Polynomials can be calculated using a closed formula from Rodrigues' formula: 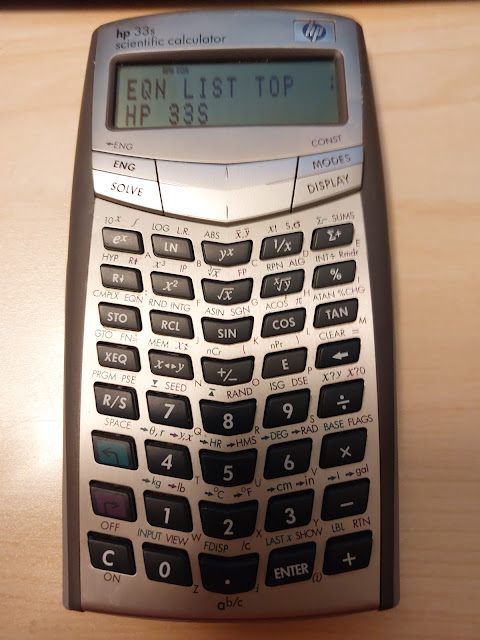 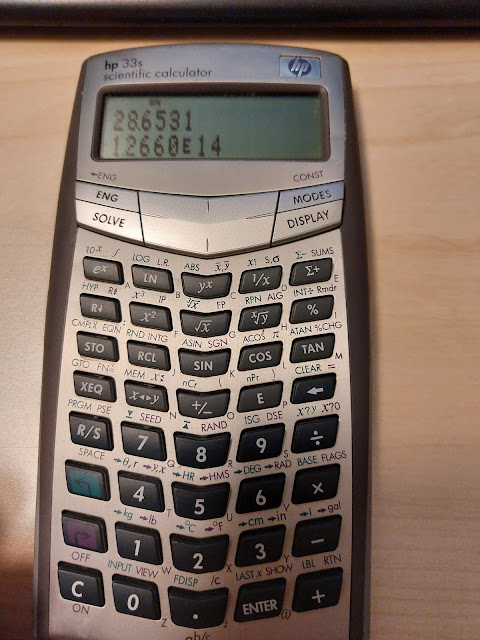 The calculator with the Chevron Keyboard!
Quick Facts
Model:  HP 33S
Company:  Hewlett Packard
Years:  2003-2007
Type:  Scientific
Batteries: 2 x CR-2032
Operating Modes:  RPN, ALG
Memory:  31,277 bytes
Number of Registers: 27, A-Z, i
Display:  2 stack levels
Features
*  standard scientific calculator functions: trig, logs, power, absolute value, integer and fractional part, combinations, permutations, random numbers, hyperbolic functions, and more
*  factorial function that allows real numbers;  Γ(x) = (x - 1)!
*  polar and rectangular conversion functions,  very popular (for good reason)
*  40 scientific constants
*  8 sets of SI-US conversions
*  base conversions
*  algebraic mode (which I don't know anyone who would use this calculator in algebraic mode, but it's there)
*  linear regression  (y = mx + b)
*  fraction display mode ( [ ←| ] [ . ] (FDISP))
*  storage and recall arithmetic
We can store equations for evaluation, solving, and integration.
Full list of conversions:
Polar (→θ,r) - Rectangular (→y,x)
Hours (→HR) - Hours-Minutes-Seconds (→HMS)
Degrees - Radians
Kilograms - Pounds
Degrees Celsius - Degrees Fahrenheit
Centimeters - Inches
Liters - Gallons
Programming
The HP 33S has keystroke programming and the set of commands similar from the HP 32SII:
*  INPUT var
*  VIEW var  (views the variable without putting the variable's value on the stack)
*  Subroutines and Return
*  Comparison tests between x and 0, x and y.  If the test is true, execute the next step, otherwise skip the next step
*  ISG:  Increment and skip if greater
*  DSE:  Decrement and skip if equal or less than
The HP 33S designates one register, lower case i, for indirect addressing.  The absolute integer value of i determines where storage, recall, label, subroutine, integration variable, exchange, and function designation.  Use (i) to use indirect addressing.  Indirect registers can also access statistical sums:
(i) = 27,  i
(i) = 28,  n
(i) = 29,  Σx
(i) = 30,  Σy
(i) = 31,  Σx^2
(i) = 32,  Σy^2
(i) = 33,  Σxy
The HP 33S has 26 labels, which restrict programs to 26.  Hence, LBL A instead of LBL A0001.   At first, I didn't like the restriction, but I learned to live with it and don't mind it as much.
Let's Talk About the Chevron Keyboard
The HP 33S is a unique calculator it's keyboard style:  the keys take a slanted quadrilateral shape, with the center column of keys taking a chevron style shape.   At the top there is a directional pad.  Hewlett Packard took a chance with the design from the standard calculator shape, and it was not a homerun.
The beginning production of the HP 33S was not successful. Keys had bad responses, the display was not up to par, and some keys are hard to press.   It took Hewlett Packard several production runs to get the keyboard working right, which unfortunately killed the reputation of the HP 33S.  Towards the end of its run, the keyboards were fixed.
I don't mind the unique keyboard, my biggest issue was the spacing the keys where sometimes the shifted functions and alpha characters did not have much space.  This made the keyboard busy.  I also do not like the black arrows on the green and purple backgrounds on the shift keys, I use HP used a lighter font for those arrows.
A Phoenix of Calculators
When the HP 33S first hit the market, the calculator was disliked.  Now, it is a sought after calculator.   The original price for the 33S was about $50 US dollars, now if you want one, be prepared to pay at least $75 US dollars, sometimes triple digits.  Make sure you are buying the HP 33S from later in the run (towards 2007).
Another factor of why the HP 33S is becoming a collector's calculator, the successor, the HP 35S, had several shortcomings such as the number of mathematical bugs and the lack of the rectangular and polar conversion functions.   The HP 33S is closer to the classic style, like the HP 32S and HP 32SII.
I don't expect to ever be an anniversary edition of the HP 33S but it was an underrated calculator and has its place in calculator history.
Tomorrow I have a list of programs and an integer demonstration.
Eddie
All original content copyright, © 2011-2022.  Edward Shore.   Unauthorized use and/or unauthorized distribution for commercial purposes without express and written permission from the author is strictly prohibited.  This blog entry may be distributed for noncommercial purposes, provided that full credit is given to the author.
at June 25, 2022

TI 84 Plus CE and HP 33S: Scaled Data for Statistics

Introduction and the Mathematics

The goal of the programs posted today is to take a data set of real numbers and scale it down to the range [1,10].  Why?  Sometimes scaling data by applying a linear transformation, it could make curve fitting and data analysis more accessible and open up regression analysis previously not available, such as logarithmic or power regression.

Solving for a and b:

Apply this transformation to the data set to get:

And to convert back:

Hope you find this helpful.  Next week is a retro review of the HP 33S Calculator, once abhorred now held as valuable.

TI-84 Plus CE Python: The Split Command and Some Statistics

TI-84 Plus CE Python:  The Split Command and Some Statistics

The split command allows the us to accept a list of input, use a character to split (spaces, commas, semicolons, etc.).

Remember that the default of the input command is strings, so we have to change data types when needed:

The .split command does not require a module.

Hope you find this useful.  Until next time, 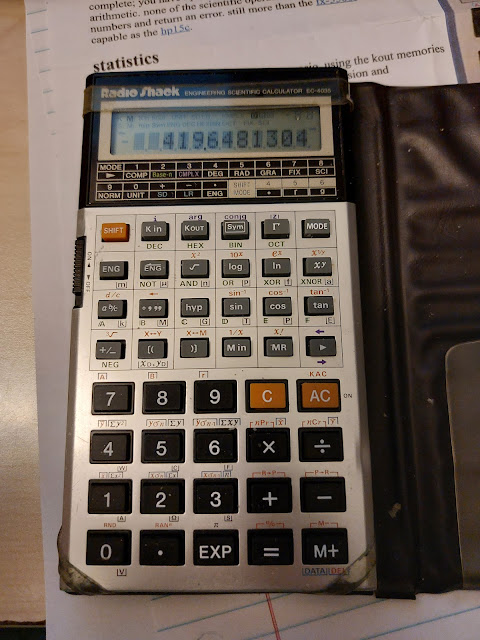 *  Base conversions with Boolean algebra

The Radio Shack EC-4035 (Casio fx-580) uses an AOS (postfix) operating mode,  instead of typing expressions as they are written.

In linear regression, the equation used is y = A + Bx, where A is the y-intercept and B is the slope.  The statistics mode uses the six constant memories as follows:

The EC-4035 has a gamma function (Γ), which accepts all real numbers except for negative integers (-1, -2, -3, etc, because the gamma function is undefined there).  I wish this was available on more scientific functions.

In the complex mode (Mode 3), the available functions are:

The arrow key [ → ]  and the key sequence [ SHIFT ] ( ← ) can scroll complex numbers.   Complex numbers are entered in rectangular form.

Results and calculations can be made using Engineering units and certain Electronics symbols.  All are accessed by using the [ [Sym] ] key.  The symbol each key has is located on the bottom right of the key in navy blue.

[ MODE ] [ . ]:  Engineering Mode.  Results are shown, when applicable, with engineering symbols, for instance:

[ MODE ] [ 0 ]:  Unit Mode.  This is an enhancement to engineering mode to add electronic units:

The electronic units can be combined with engineering units.    Also, the appropriate unit is determined in calculations.    To leave Unit Mode, go to Comp Mode by pressing [ MODE ] [ 1 ].

The features of the EC-4035 gives a pretty standard advanced scientific calculators with additional features geared towards electronic engineering.

Perhaps the next perfect calculator for electronic engineering would be a combination of the EC-4035 (fx-580), Casio fx-61f, and Calculated Industries Electronic Calc Pro (5070).