Factorial: It's Not Just For Integers 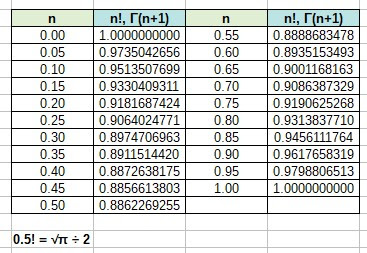 Factorial Values of 0 to 1

Below is a chart are the values for 0 to 1, along with several approximation polynomials.  The value and polynomials have been determined using LibreOffice's Calc application. 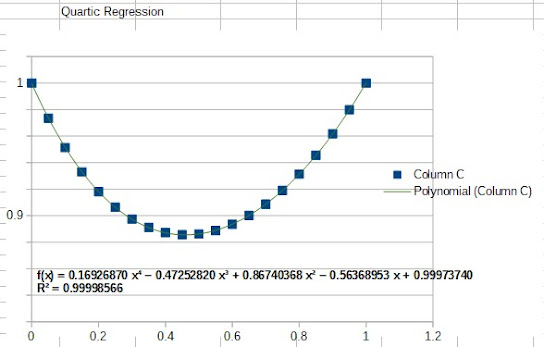 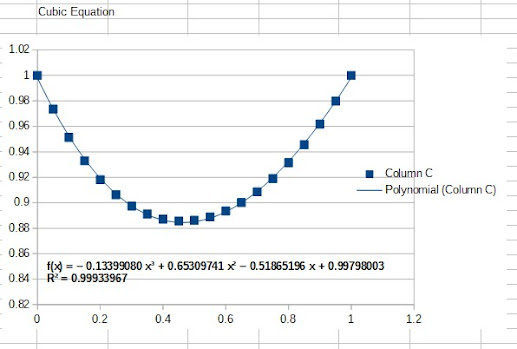 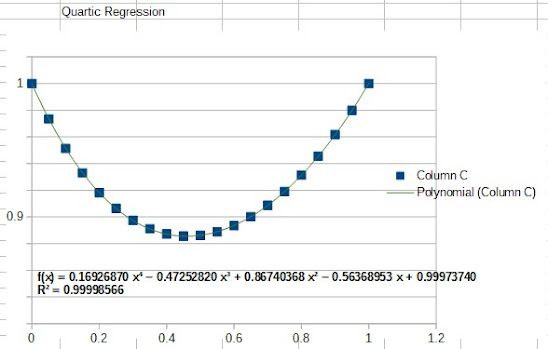 Happy Halloween,
Eddie
All original content copyright, © 2011-2020.  Edward Shore.   Unauthorized use and/or unauthorized distribution for commercial purposes without express and written permission from the author is strictly prohibited.  This blog entry may be distributed for noncommercial purposes, provided that full credit is given to the author. 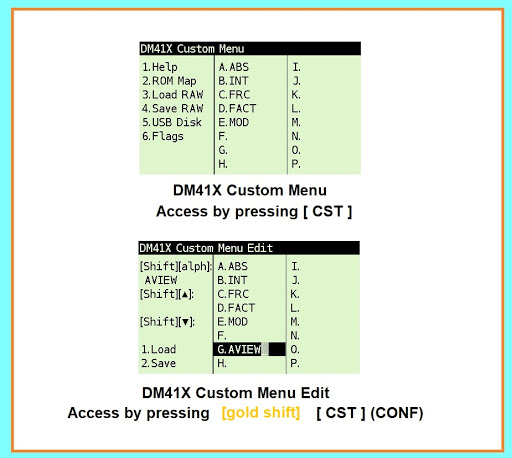 With the new Swiss Micros DM41X, custom menus comes to the HP 41C engine.   The custom menu can hold up to 16 commands or user program shortcuts.   Best yet, the customized menu can be saved and transferred among fellow DM 41X users.   The custom menu is very easy to use and set up.

The custom menu has six other commands that are always present:

1.  Help:  The DM41X's help facility which additional commands that come with the 41X, information about the ISG/DSE loops, date, time, and alarms, and additional topics like Angel's references.

2.  ROM Map:  A map where all the modules are loaded into the virtual ROM facility of the DM41X.

5.  USB Disk:  Put the DM41X in USB mode, allowing to transfer files between the calculator and the computer

Pick any of the slots A through P.  While in this mode, you can customize three additional key sequences:

When prompted, just type the command, label, or program name.  Alpha mode has been turned on automatically.  Finish and accept by pressing the [ R/S ] key.   Pressing the [ ON ] cancels the customization.   The custom menu does not affect the programming memory.

One more thing, the name cannot have a space.   For example:  ARCL ST X is not allowed.   ARCL is.

That's all there is to it.  Have fun, 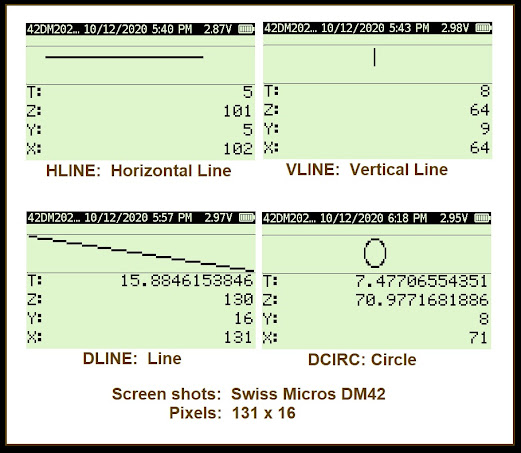 The HP 42S, Swiss Micros DM42, and Free42 has several graphics commands that allows for drawing and plotting functions.   The following programs draw simple geometric objects on the calculator's screen:

DLINE:  a line between two points

DCIRC:  draw a circle given a center point and radius

To plot points along the line, use the equation:

For the circle, the pixels to be plotted are:

Since a full circle is plotted, we don't have to worry about accounting for the fact that the y axis is inverted.

PRLCD:  print the screen.  Depending on whether the printer is on or off and what machine is being used, the screen would printed to the optional infrared printer or saved as a print file.  Turning print off (by the PROFF setting) will just display the screen.

PIXEL:  Takes the arguments from the y-stack and x-stack and draws a pixel.   There are several flags that can affect how the command operates, that is beyond the scope of this blog entry.  Non-integer numbers can be used as pixels.

These programs and routines can be used stand-alone or as subroutines.

The program FHGT approximates the height of a fire in three scenarios:

* A fire with a base area of approximately 0.5 meter

* A fire set in a corner

The general equation is:

H = height of a fire in meters, including the tip

factor = constant depending on the scenario the fire is set in

*  The front velocity of the smoke, or how quickly the smoke fills a corridor

*  The time it takes for front velocity to fill the corridor.

H = height of the corridor in meters

L = length of the corridor in meters

Da = density of the corridor of the ambient air

Dc = density of the fire fluid 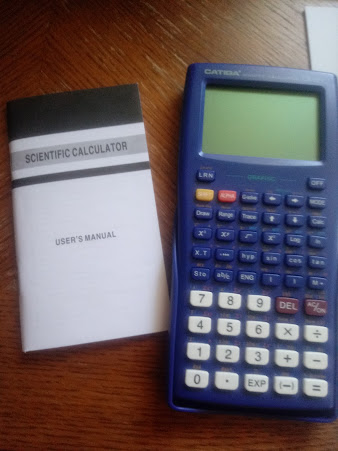 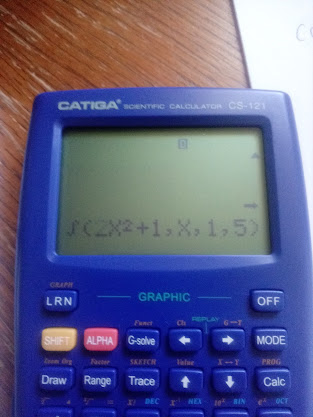 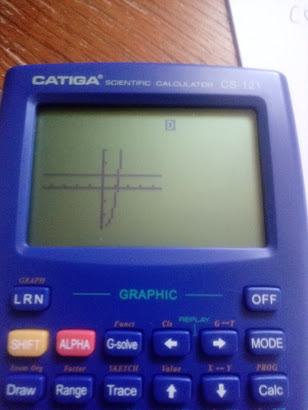 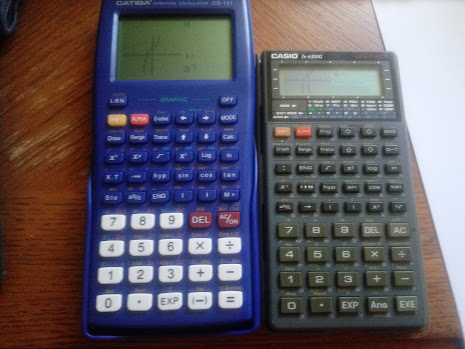 The HPCC 2020 Virtual Conference took place on October 10, 2020.   The HPCC is the Handheld and Portable Computer Club is a long running calculator and computer site based out of the United Kingdom.  Their meetings are held virtually on the 2nd and 4th Saturday of every month.  I have recently joined the HPCC and glad to be a part of the club.

You can find more information on the meetings here:  http://www.hpcc.org, under the Home tab.  Membership rates are between £17 to £23 depending where you live.

The conference has the following speakers and topics:

Will Marchant:  DM16 in a satellite launch campaign

Eric Rechlin of hpcalc.org has put together a new website where you can download manuals for Hewlett Packard calculators, past and present.

Coming soon:  the USB that contains information calculator conferences including manuals through 2020 will be available his commerce site,  https://commerce.hpcalc.org.

Introduction: The Theorem of Sós

A set of triple rational numbers (a, b, λ) is considered to be a H-triple if

Should the set of rational numbers (a, b, λ) can be further test to see if to is also a Heron triple.  That criteria (see source) requires for some numbers λ' and A (area):

If the H-triple passes, then it becomes a Heron triple and the sides (a, b, c) (see (I) above) are the lengths of a Heron triangle.

It is possible that an H-triple is not a Heron triple.

Given relatively prime integers m and n (where gcd(m,n) = 1) and μ, an H-triple can be generated by the following equations:

Testing the Theorem of Sós

The program htrist tests the criteria for the triple (a, b, λ).

For an irrational number such as √2, the Classpad determines the exact fraction to be 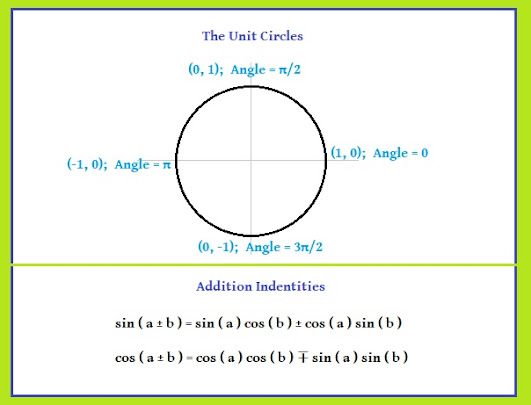 TI-84 Plus CE: Lorenz Curves and the Gini Coefficient

TI-84 Plus CE:  Lorenz Curves and the Gini Coefficient

Developed by Max O. Lornez, the Lorenz curve displays the graphs of income distribution and income inequality.  Each point of represents a cumulative percentage of an income level.   An example of a Lorenz curve: 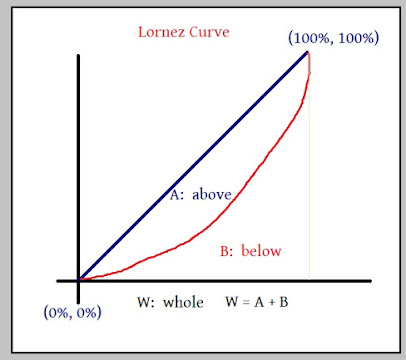 Note: that the total area is the area of a right triangle

The Gini coefficient is defined as:

Source:
Reindhardt, Uwe E.   "The Construct of Lorenz Curves and of The Gini-Coeficient to Decpict Degrees in Inequality in Health Care"  Princeton University, WWS 597  (Political Economy of Health Systems)
URL:  https://scholar.princeton.edu/sites/default/files/reinhardt/files/597-f2009lorenz-curves-and-inequality-in-health-care.pdf
Retrieved August 26, 2020
Eddie
All original content copyright, © 2011-2020.  Edward Shore.   Unauthorized use and/or unauthorized distribution for commercial purposes without express and written permission from the author is strictly prohibited.  This blog entry may be distributed for noncommercial purposes, provided that full credit is given to the author.
at October 04, 2020

TI-84 Plus CE and HP 41C: Method of Successive Substitutions

TI-84 Plus CE and HP 41C:  Method of Successive Substitutions

Repeating the Calculation Again and Again

With an aid of a scientific calculator, we can solve certain problems of the form:

In any case with trigonometric functions, the angle mode will need to be in radians.  You will also need a good guess to get to a solution and to know that at some real number x, f(x) and x intersect.

Depending on the operating of the scientific calculator the keystrokes would be:

Repeat the loop as many times as you like and hope you start seeing the answers converge.   After repeating the loop over and over and over again, at six decimal answers, the readout will be about 1.512135.

The program SUCCESS illustrates this method.

This program calls on the subroutine, FX.   FX is where you enter f(x).  End FX with the RTN command.