This blog will focus on generating a random permutation given n elements.

TI-84 Plus:  Using the randIntNoRep function.

For the TI-84 Plus, generating a permutation is rather simple with the randIntNoRep (random integers no reputation function).  The syntax to be used is:

For n = 3, the syntax would be randIntNoRep(1,3,3).  You can find this function by pressing [math], PROB submenu, selecting option 8.

For the Casio Prizm and the HP Prime, a program will be needed.  I gave the program the title SAM for sample (no repeating numbers).  Generally, SAM uses two lists.  The first list is generated by a sequence from 1 to n.  The second is rearranged list.  In order to get sample to not have repeats, during the main loop, as numbers are picked, they are replaced by 0.  During subsequent picks from the first list, the loop tests to see for a nonzero list.  The second list is the output.

Note that with the Casio Prizm that lists must have at least one element to be initialized, where the HP Prime allows for blank lists (lists with zero elements).


Update:  Changing c:=RANDINT(n) to c:=RANDINT(1,n) forces the random integer function to choose a number between 1 and 0, since RANDINT(n) allows for zero, allowing for a number to repeat, which is what we don't want.   Eddie

Note:  This is different from the permutation function (nPr, PERM) on your calculator, which calculates the number of arrangements of r from n objects.  (Formula: n!/(n-r)!)
Eddie

NOTICE:  The author does not use third-party features on this blog.   In order to comply with European Union laws, Google added a notice to explain Google’s use of certain Blogger and Google cookies.

Define the function FD(x) as:

The function int represents the integer part function (iPart on TI calculators, IP on most HP calculators).    This function extracts the first digit (most significant digit) of x, where the domain is:

AZ2BE (Azimuth to Bearing)
Note:  Bearings start clockwise from due north.  Bearings will be reduced to angles between 0° to 360°.

Three outputs will be returned:  bearing, direction string, and quadrant reference number (for reference).  The HP Prime version will return a list.

BE2AZ  (Bearing to Azimuth)
Note:  Bearings outside of range of 0° to 90° or quadrant numbers outside of 1 to 4 will result in an “UNEXPECTED RESULT” message.

Review: "Cosmic Numbers: The Numbers That Define Our Universe" by James D. Stein 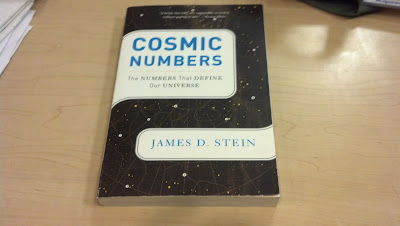 One of the books I purchased recently was “Cosmic Numbers: The Numbers That Define Our Universe” by James D. Stein.  What attracted me to the book is that I am fascinated by mathematical constants (my favorite number is π) and how they came about. Stein talks about the following constants in the book:

While I have not yet finished the book (got three more chapters to go), I recommend this book.  Stein writes in a straight-forward, entertaining matter.  Here of some of my favorite highlights of the book:

Gravitational Constant:
* The concept of the gravitational constant comes from Issac Newton’s Principia (1687), and as we are aware, we have two constants:  Big G for the universal constant and little g for the local constant.
* Little g (local gravity) was fairly easy to get, at least for Earth, using the relationship d = 1/2*g*t^2.  It would take until the mid-1700s before Henry Cavendish would propose a way to calculate big G, and even later before the first values of G were found.

Speed of Light:
* The first calculation of the speed of light was inspired by Galileo Galilei’s discovery of moons in front of Jupiter in 1610, which inspired Ole Rømer to come up with the first estimation of the speed of light.
* Albert Michelson is most connected with the speed of light, which will lead to the famous Michelson-Morely experiment, in which a beam of light was split into two separate, divergent beams.  Each of the diverged beams would reach two separate mirrors, and the difference between the wave’s speeds were calculated.
* An interesting paradox was presented in the chapter, involving lighthouse and a beach with the wall behind the lighthouse, and the speed of light is calculated using the distance between the lighthouse and the beam, in which the speed would reach a limit.

Absolute Zero:
* I know how refrigerators keep its food cold:  Liquid chlorine circulates in coils which evaporates into chlorine hydrate from the surrounding environment.  An electric pump pressurizes the gas, allowing the chlorine to turn back into a liquid, and the absorbed heat is released into the refrigerator.  Thank you Michael Faraday.  (OT?)
* In practice, temperatures near absolute zero have been reached (0 K, -273.15°C), both using a Bose-Einstein condensate and lasers to atoms almost to the point where atoms are completely still.

Boltzmann Constant:
* If you want a good mnemonic for the equation of work, just get mad:  W = m*a*d.
* Using the relationship of a monatomic molecule’s transitional energy and it’s kinetic energy, Ludwig Boltzmann solved for his constant (k) by solving 3/2*k*T = 1/2*m*v^2

Efficiency of the Hydrogen Fusion:
* I’m thankful that hydrogen fuses at a constant rate (.007 weight loss per nuclei).  If it didn’t, life may have not been possible.
* Measuring the fusion came first came from Lord Kelvin asking “How does the sun keep shining?”  The greatest contributions came during the decade of 1895-1905, and a value was finalized before the beginning of World War II.

If you want a good read, check “Cosmic Numbers” out. 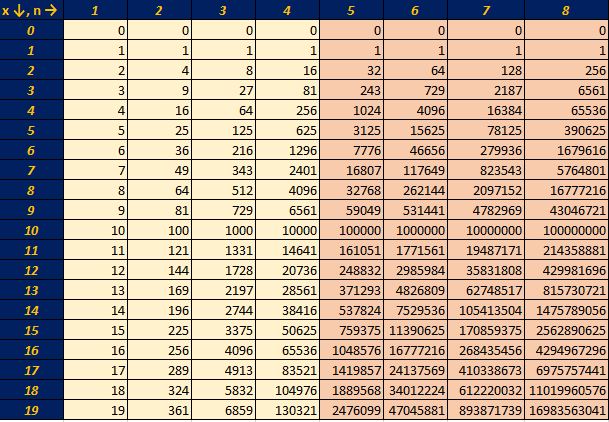 Note:  The numbers in bold I typed in because the number of digits Excel 2013 will carry in its integers will only go so far.

Now, let’s look at just the last integer.  On Excel, the last digit can be extracted by the following formula: 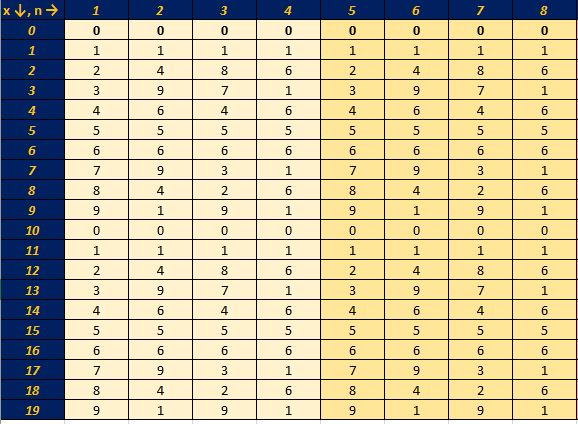 Starting to see a pattern?  I know this is not a rigorous proof, but four patterns definitely present themselves:

The program DIATOMIC will calculate:

A diatomic molecule is a molecule made of two atoms.  Examples are H2, O2, NaCl (sodium chloride), and CO (carbon monoxide).

This program can be adopted to other graphing calculators, but here is a version for the HP Prime: 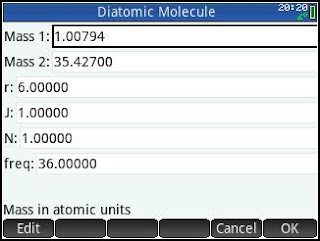 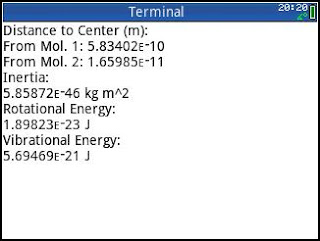