*  For some reason apps through Google Play, sales tax is charged for downloaded apps.

My focus will be on the paid version.  The free version does not have 3D Graphing, the ability to store constants, functions, or expressions. 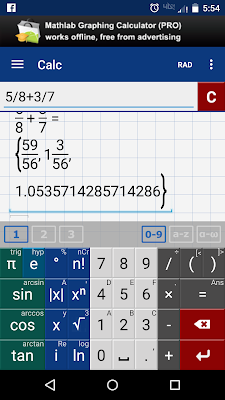 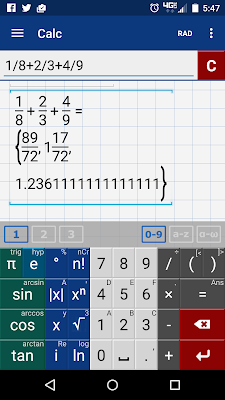 From the initial looks of things, the keyboard on the Calc mode is simple with a limited amount of functions.  Don’t let the minimalist look fool you.  Behind many of the keys lie many additional functions, which can be accessed by either repeated presses of the button or holding down the button to access functions.  For example: 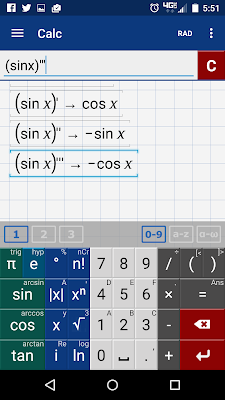 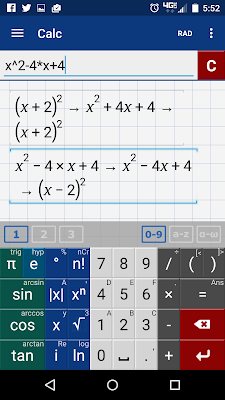 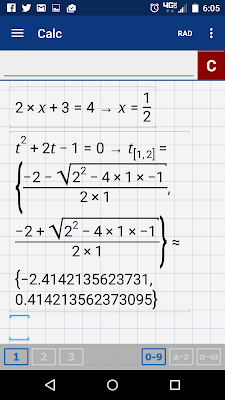 Holding the x^n key grants access to x^n, x’, x” (for derivative calculations).  Yes, Mathlab does the symbolic first and second derivative of f(x).  You can combine x’ and x’’ for third and higher derivatives.  With the degree key (°), x’ and x’’ can be used to execute calculations using degrees-minutes-seconds.

To switch between trigonometric and hyperbolic functions, press and hold the π and e keys, respectively.  And yes, you get access to the csc, sec, and cot (and all the relative functions) on both modes.  The angle modes available are Degree and Radian.

When you enter fractions, Mathlab displays answers in both fraction (mixed and improper, if necessary) AND the decimal equivalent.  Displaying multiple forms is also present in calculations involving degrees-minutes-seconds and factoring/expanding polynomials.

Just enter the calculation and the app makes the calculation for you, despite the presence of an equals key.   Calculations are terminated by pressing the return key.  I have to admit that this takes getting used to.  Also, when entering expressions, I found it is easier to look at the entry line above the output screen rather due to the automatic calculation.  Entries on the output screen are shown in textbook style.

This doesn’t mean that the equals key is useless.   Mathlab also solves equations and inequalities.  Once a variable is solved for, the value is stored in the variable.  If you want to execute a new calculation with the same variables (x, y, t, z, r, θ), press and hold the clear [C] button or start a new worksheet.

Calc also features matrices, vectors (the multiplication key holds both the dot and cross product), and full complex number support.  However, the factorial function only works with integers. (You definitely can go higher than 69!).  For the matrix functions norm, tr (transpose), and det (determinant), you’ll need to type them in manually. 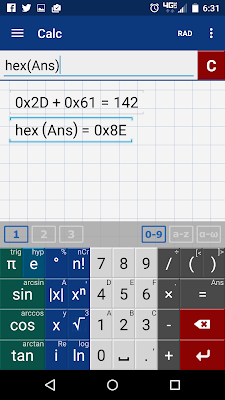 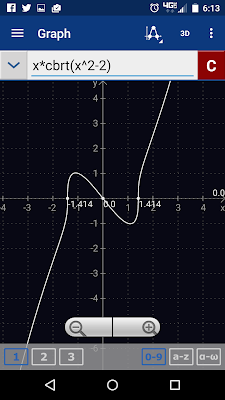 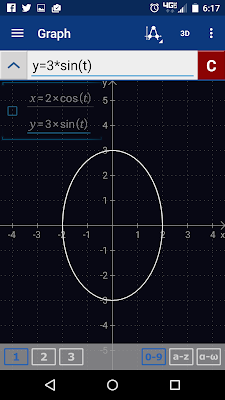 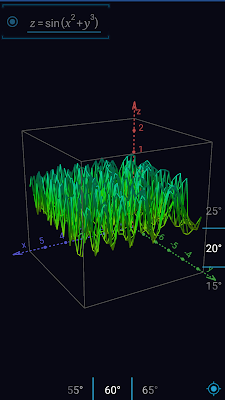 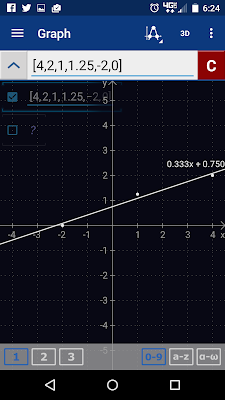 Graphing allows you to graph functions, polar equations, parametric equations, and 3D (Pro version only).   You can trace on anything that is graphed by holding down on the screen and tracing the graph with your finger.  If applicable, extreme points and roots are shown.  With the Calc mode, just swipe the keyboard down for more of the output screen, until you are ready to operate again.

For polar equations, insert the variable θ.  For parametric, two expressions will be entered.  The first will be in the format x = f(t), press Enter, then enter the second in the format y = g(t).

For 3D, entering equations to be graphed is simple as in 2D mode.  Mathlab defaults to colorized mesh graphs, but if you want, you can turn off color and/or change 3D graphs to dots.

Graph also offers inequality graphing.  Unfortunately there is no shading, you get arrows that indicate which area of the graph is covered.

If you enter a vector with an even number of elements, you can create a scatterplot.  The vector will be in the format [x1, y1, x2, y2, …, xn, yn]. You can tap the vector on the left side of the screen below the input screen (check mark) to get a linear regression line.

Again, Mathlab does an excellent job getting many functions in the little space of the phone size.

I also like the ease that you can zoom and scroll graphs.  The app is very responsive. 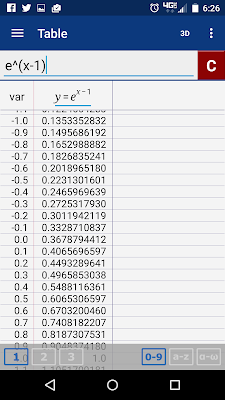 The Table function is an extension of the Graph mode.   Enter your expression in Graph mode and switch to the Table to see it.   You can also enter additional expressions outside of Graph mode.   The zoom and scroll also work dynamically and well.

Storing Constants and Functions (PRO Only) 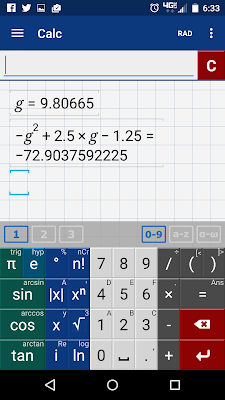 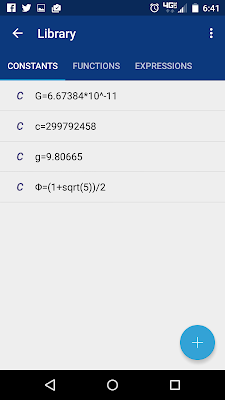 You can use the alphabetic and Greek keyboards to define constants and functions.  Obviously, if you plan on using the app for an extended period of time, it pays to get the Pro version.  You will need to type in all your constants, since Mathlab doesn’t provide a pre-library of constants.

There are two help pages.  The first comes with the app, and it is just a quick help page.   You do get the full keyboard mapping on this page.  The second page is through Mathlab website (help.mathlab.us for the United States site) and is very thorough.

I’m impressed on how Mathlab manages to organize many functions into what looks like a minimalist (clean) keyboard.  The automatic results are great and the zoom/scroll dynamics of graphs and tables are awesome.  You get a lot for the Free version, but if you plan to use this app for a long period of time, I would recommend getting the full version, particularly for the ability to store constants and customized functions.