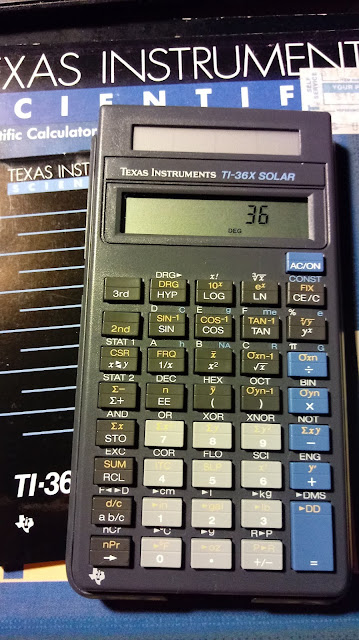 Texas Instruments no longer manufactures new TI-36X Solar calculators, so if you want one, pawn shops or internet websites such as eBay would be the place to get one.

The TI-36X makes good use of the exchange key, and it is a non-shifted key which facilitates easy operation.  In addition in allowing users to interchange arguments (i.e. switching the subtrahend and minuend in a subtraction calculation), the exchange key allows for:

The design of the keyboards of the TI-36X Solar evolved over the years.  The first major design was rectangular, most of the keys were black with light font.  The arithmetic keys were at first dark gray, then blue.  This was the shortest keyboard in length.  The calculator had a slide hard case.

Then in 1993, the TI-36X Solar had a keyboard with a rounded edge at the bottom of the keyboard.  The 1996 version is slightly longer in size, with the yellow 2nd key and blue-purple 3rd key.  Constants were labeled in green.

The final design of the TI-36X came in 2004, with an even bigger keyboard.  This time the keyboard was silver with the royal blue 2nd key, lime green 3rd key, and constants marked in maroon.  This is the most readable keyboard, however the 2004 version needs more light to operate than its previous versions.  This version also had a snap on case.

With the exception of the 1993 revamp, the keys were plastic.  The 1993 version had rubber keyboards.  The keys generally had a good response to them.

The TI-36X Solar was itself a successor to the TI-36 Solar.  The TI-36 Solar lacked constants, English-US conversions, fractions, and linear regression, but had complex number arithmetic.

The successor the TI-36X Solar is the TI-36X Pro, which has a multi-line screen, adds among other things, integration, derivatives, function tables, textbook input/output, matrices, and additional regression types.

My introduction to the TI-36X Solar was when in I was in middle school back in the early 1990s.  I couldn’t put this calculator down.  I wished I remembered to use the hard cover because one day I had the TI-36X Solar in my pocket with a pencil.  The pencil poked through the solar panel and it was the end of it.
Verdict

The TI-36X Solar is a feature rich scientific calculator and as I said before, one of the line non-programming solar scientific calculators at the time.  The keyboard is responsive, you have a nice set of common constants and conversions.  I like the layout of the keyboard.  This is a good calculator to pick up, even if it is just for collection purposes.   For a retro calculator, the TI-36X Solar is a definite recommend from me.