Today is going to be a hodgepodge of what's been happening over the last week. (when I am not at work, working out, sleeping, etc)

Congratulations to my cousin Gina, she gave birth to a beautiful girl, Beth on June 28! :)

The Calculator Rainbow is Back

During the last two weeks, I saw that Staples, Office Depot, and Target is getting ready for Back to School. it must be around the corner, man, we are already in July 2012! Texas Instruments has once again leashed its colorful band of TI-30x iis calcualtors in many colors: light blue, green, orange, and pink. There is also a pink version of the multi-line TI-30 XS in addition to its normal pale blue sibling. Yeah, it is hard to admit to that as a guy, I own anything pink (I called it light red at first). Even Casio gets in the act, at least at Staples, the fx-300ES PLUS has black, pink, and I think green.

I could not resist. 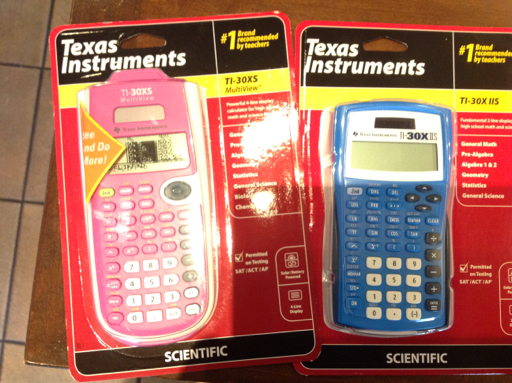 Now you know where I brushed up on Kepler's Laws, in part to hopefully prepare myself for the astronomy meeting tomorrow night (where I am meeting with my good friend Mike Grigsby):

1. Planets travel in an elliptical orbit with the sun at on of the two foci of the ellipse.

2. Planets sweep out at equal areas at equal times. This explains why planets move faster when they are closer to its sun and move slower when planted are away from the sun.

3. The period of an orbit can be described by the following equation:

In attempt to get a further understanding of Sabermetrics, the analysis of baseball and softball. We all know that part of the game of baseball includes stats galore, and at least in the United States, shaving cream pies and Gatorade baths to game day heroes. I wish there was a golly stat for pies, that would be awesome... OK I am getting off topic.

I took a look the ever vaunted stat, the WAR, or Wins Above Replacement. Basically, if a player's WAR is high, at least a 4, he is doing well. WAR is defined as a measurement of a player's "value" over a scrub (low-level minor-league) player. The goal of WAR is to assign one major value to every player that takes into account everything possible.

Thankfully, sites like www.fangraphs.com has a WAR score for just about everyone who has played baseball (at least in the US).

Generally, the batter's WAR consists of a weight batting average weighed against a dynamic league average, UBR (baser inning measure which is not a rigid formula but made of a lot of judgement calls, whose I don't know), and UZR (fielding rating calculated of the type of play and difficulty factor). None of the formula is straight forward, and as I if understand it, the weights change over time.

I didn't get much into how a pitcher's WAR is calculated, but I imagine it is complex as a batter's WAR.

First of all, where do these analysts get the time to manage the massive amount of calculations? Do they ever enjoy the game? Second, how are the weights determined? So far I have not seen anything on how the weights are calculated - are they determined by complex formulas or arbitrarily?

A Word of Thanks

Thank you to everyone who reads my comments and leave comments. I am very pleased to read that many people are enjoying this blog. This blog is one of favorite things to do. I appreciate the compliments and comments.