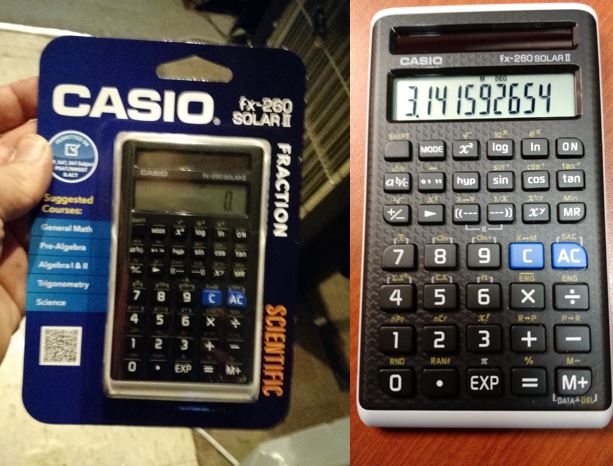 As a note:  The fx-260 is the name for the version sold in the United States.  Internationally, the calculator is known as the fx-82 Solar II, and Casio does have that calculator on its website:

An Update of a Classic

Pretty handy for a basic scientific calculator.  The fx-260 Solar II, like its predecessor runs entirely on solar and light power, hence a completely green calculator.  50 lux is required.

There is a NF version which was stated on the quick manual that came with the fx-260 Solar II.  The NF stands for “no fraction” and the diagram shows the fraction button [ a b/c ] button disabled.

The percent key still works the same as the predecessor.  The keystrokes:

The differences between the fx-260 Solar II are:

1.  The processor is faster, most noticeable when try to calculator n! when  50 < n < 69.  In reality, it can be seen as negligible since the predecessor is no slow poke.
2.  The fx-260 Solar II is has a more compact design than the original fx-260 Solar.  The fx-260 Solar II is close to a size of an iPod Touch/iPhone.  Per the manual, the dimensions of the fx-260 Solar II are 3/8” height, 2 3/4” width, and 4 3/4” depth.
3.  The one difference I’m not a fan of is how the mode reminders are moved to the back of the calculator.  Furthermore, the reminders are white text on a white background.  It is only because of the etching that the reminders could be readable. 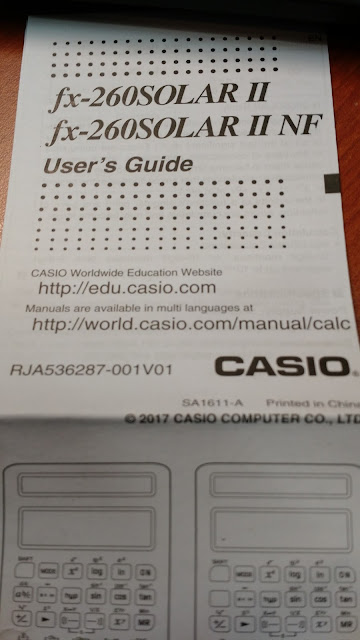 Easter egg: I think this is the first time Casio dated their manual (2017).

If you are fan of small calculators, solar calculators, Casio, basic level scientific calculators, or just want something nice to add to your collection, then the fx-260 Solar II (and the original fx-260 Solar) is a nice pick up for not much money.

I bet if Pac Man and Ms. Pac Man ever used a calculator, it is this one: the Garrett CM 20 calculator.  I received this calculator as a present from my good friend Chris Brame in Illinois.  Many thanks and appreciation, and it is hit with the household.

There is close to no information for the Garrett CM 20, only to find that model originated in 1973, predating the famous Pac Man game by seven years.  On the bottom label, the Garrett Comtronics Corporation is located in San Diego, California.  The CM 20 was made in the United States.

The CM 20 is AC powered, with the power switch on the back of the calculator. 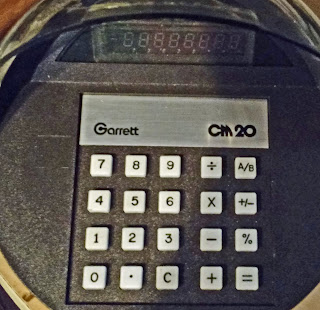 The keyboard on the CM 20 is just a delight; the keys are light to the touch and easy on the fingers.  Also, the keys are responsive.

Check out the display, the digits are orange! 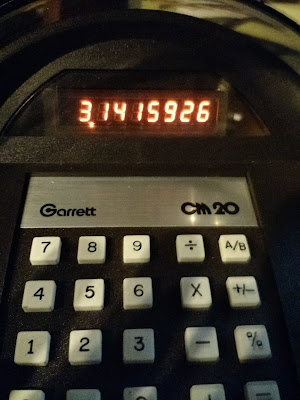 The CM 20 is a real basic four function calculator, without memory or a square root key.  However, the CM 20 has an A/B key, which works as a “Last X” key (think scientific keystroke programmable calculators from Hewlett Packard).  After a pending operation completes (+, -, *, or ÷), press the A/B key to recall the last number entered before completing the operation.  For example:

The percentage key works a little bit different from most four-function calculators.  On the CM 20, you are required to press the equals key to complete the operation.  To find out a percentage of a number, enter the base, press any of the arithmetic keys, the percentage and the % key.  To illustrate:

This calculator is going to be on my desk for a long time.  I love the retro 1970s design and the spherical shape of the calculator.  Thank you Chris!