Repeat as many steps as desired.

This method was presented by Robert M. Eisberg in his 1976 calculator programming book (see source below).

The program uses the following variables:

Output:  A matrix of two columns, t and y.

Output:  A matrix of two columns, t and y.

Fortunately any of the programs created on the fx-7400g Plus can be translated literally to later Casio graphing calculators.

Notes:
*  This is best used when the function list is clear.
*  Set up graph screen parameters (Xmin, Xmax, Ymin, Ymax) before hand.
*  Insert polar functions by editing the 7th line (in italics), using I for θ.  The result must be stored to R  (by → R).

The programs SUMFX and INTFX will require the subroutine program FX.  FX is where you insert the function f(x).   The result is stored to Y.

The program BINOMEXP shows the coefficients of the binomial expansion (Ax + B)^N.

The program FORDINT calculates the third point on a triangle where the coordinates of points A  (xa, xb) and B (xb, yb) are known.  Also, a line towards P point is aimed from point A at angle α° and from point B at angle β°.

TRAVEZ calculates the new point knowing the original coordinates, direction, and angle of travel.  The angle 0° comes from due east and rotates counterclockwise.

The calculator feels pretty good to hold, it is lightweight. 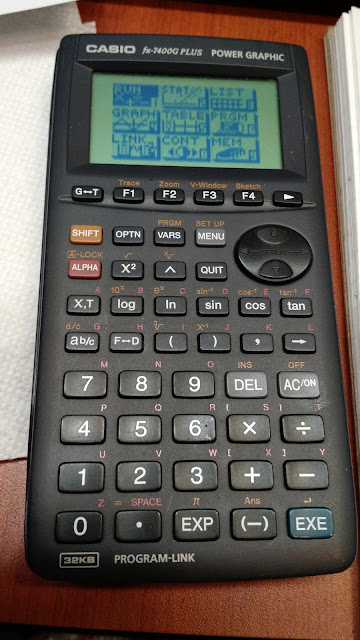 The fx-7400g Plus is a simplified version of fx-9850g family, marketed as entry level graphing calculator.  The features have been scaled down.  As a result the fx-7400g Plus lacks matrices, distribution functions, numerical integral, and polar graphing.

Casio is known as for their icon menus and the fx-7400g is no exception.  Here is the icon menu: 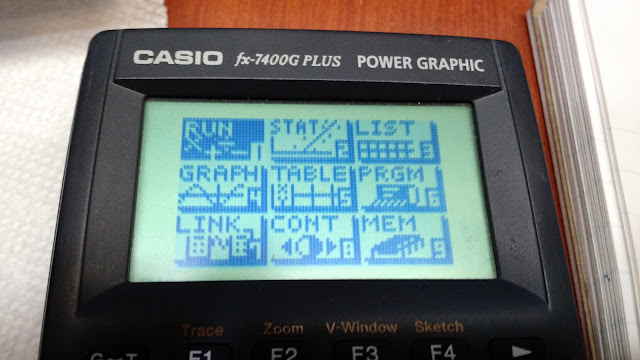 Curiosities of the fx-7400g Plus

Instead of the usual six function keys (F1 – F6), the fx-7400g Plus has four function keys, with two of them replaced with [ G<>T ] (graph-table switch) and [ > ] (next menu page).  I don’t know if the [G<>T] key is used today, but it is used two switch between the graph and home screen.  Today, the command only works when the current Casio graphing calculators (like the Prizm fx-CG 10) is in the Linear Input/Output mode.

When a program is executed, the calculator is returned to the Run mode rather than stay in Program mode.  Exit program execution by pressing [AC/ON].

When Program Mode is entered, all the programs are listed chronically (when they first created).  There is no option to sort the programs alphabetically.

Programming on the fx-7400g Plus

The programming command set on the fx-7400g Plus may be scaled down, but most of the commands we expect on the Casio Graphing calculators are present.  The lack of matrices, complex numbers, and a simplified list command set does provide a challenge, but we should be able to program for a lot of applications.

Fortunately any of the programs created on the fx-7400g Plus can be translated literally to later Casio graphing calculators.

I will present programs on next blog entry.

The fx-7400g Plus is not a bad entry-level calculator.  The early version is more an old-school graphing calculator.

HP Prime and TI-84 Plus: Method of Equal Proportions: Number of U.S. Representatives

HP Prime and TI-84 Plus:  Method of Equal Proportions:  Number of U.S. Representatives

Note:  In the Electoral College, 3 additional votes goes to the District of Columbia.  However, since D.C. is not a state, it won’t get seats in the House of Representatives.

The Method of Equal Proportions: Determining the Number of Seats

In order to represent the population as fair as possible, methods must be used to distribute the number of seats.  The method currently used is the Method of Equal Proportions, which has been in use since 1940.

The first step is to give each state one seat at the House of Representatives.  For the United States, after each state gets one seat, there are 385 seats to assign.

The population of the states are recalculated by the following formula:

where P = the state population, and m = the next potential seat (so for example, if the state currently has 5 seats, m = 6)

A recursive method, the method used in the program EQPROP is used:

where n = the number the seats the state currently has

Suppose we have a small hypothetical nation, called the Country of Celestia that consists of five states.  The government is similar to the United States, having both a House and Senate.  Each state has 2 Senators.  The five states have the following population for which 24 seats need to be distributed:

We need to adjust the population (to determine the priority number) by dividing each population by √2.  Note:  calculations in this example are rounded to the nearest integer.

After 7 seats, this is what the adjusted population looks like:

On to the programming!

The program EQPROP takes two arguments:  the list of populations, and the number of House of Representative seats to be assigned.  The program assumes that two Senators will also be assigned.

For the TI-84 Plus:  L1 is used as the population list, lists L2, L3, and L4 are used for calculations, and the results are returned in Matrix [A].

This blog is property of Edward Shore, 2016