We are entering 2015 around the world today.  Happy New Year! 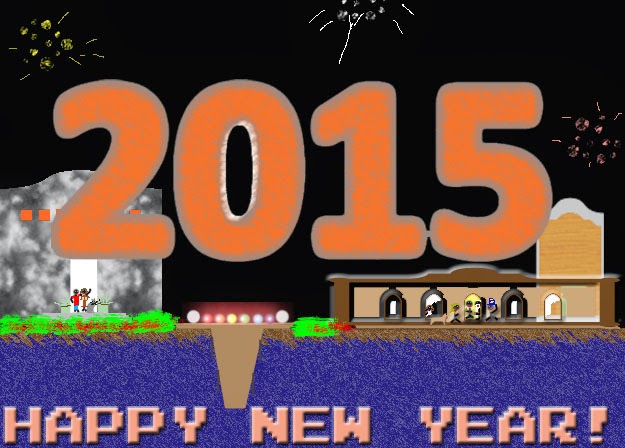 TI-84+: Doppler Effect, Finding an Equation of a Line with 2 Points, Arc Length of f(x), Orbit around the Sun


Doppler Effect for Sound in Air


C = calculated speed of sound in air, stored in m/s


Finding the Equation of a Line between Two Points


Enter two points as complex numbers (x+y*i).  The complex value i is accessed by pressing [2nd] [ 3 ]. Direction is important, P is your starting point and Q is your finishing point.


Arc Length of a Function


We will use a trick with the function variable to pull this integral off.


** Caution: This will provide an approximate answer.  Best use four to five digits at most.

The universal gravitational constant is:


a = average radius between the two objects

Letting m1 be the mass of the sun and simplifying in U.S. units, the periodic orbit simplifies to:


: Disp “ORBIT AROUND THE SUN”

I want to wish everyone a Happy, Healthy, Safe, and Celebratory Solstice, and Happy Holidays (Christmas, Hanukkah, and all the holidays that are being celebrated worldwide).

I thank everyone who follows this blog, comments, and readers.  Thank you for making this blog the success that it is.

I'll probably speak to you next week - until then, CHEERS!

Take care of each other.

HP Prime and HP 50g: Using the LSQ Function to find the Moore-Penrose Inverse of a Matrix

HP Prime and HP 50g:  Using the LSQ Function to find the Moore-Penrose Inverse of a Matrix

Recall that the Moore-Penrose Inverse of a Matrix A, A^+, with r rows and c columns is:

You can see the blog entry about the Moore-Penrose inverse here:  http://edspi31415.blogspot.com/2014/08/moore-penrose-inverse-of-matrix.html.

On the LSQ (Least Squares Solution Command) function, featured on both the HP Prime and HP 50G, you can find A^+.

Syntax to find A^+ using the LSQ Command

Where IDENMAT is the identity matrix command.

This blog is property of Edward Shore. 2014.

Bingo: Number of Cards and Odds of Winning

A standard BINGO board has a 5 x 5 matrix. Each column is dedicated to a letter, mainly B, I, N, G, and O. 75 numbers are assigned to each number as follows:

Each column has 5 of 15 possible numbers, except the N column, which only has 4. The N column has a Free Space.

How Many Different Bingo Cards Are There?

We arrived at the same destination.

What The Odds of Having a Winning Card in Bingo?

Despite this, we look at the number of cards that are played in the game rather than the numbers themselves when answering this question.

So instead of having a long calculation, which I once thought was the case, the odds of having the winning card boils down to this:

1/(number of cards in play)

This is true if you are playing BINGO by a line or blackout bingo.

Don't forget to you yell BINGO! when you win. :)


Have a great day! Now I am off to errands and maybe wrap some presents.

P.S. I am going to make it one of my resolutions to check on the comments timely.  I appreciate and thank everyone who leaves a comment.   - Eddie (12/15/14)

She also has a crater named after her on our Moon, and her stellar classification is standard (as determined by the IAU). 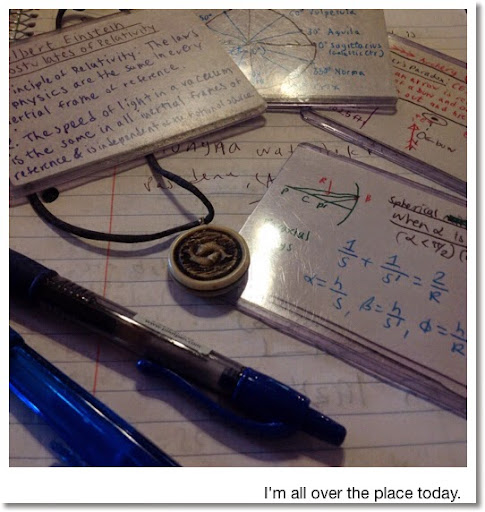 Recall that equation for time dilation is:

In short, the traveler will note observe and note that time Δt0 has passed, which the person standing still observes that time Δt has passed. The closer someone goes to the speed of light, that less person she/he experiences. You will need to go super fast. Driving at 65 mph (29.0756 m/s) on the freeway won't cut it and here's why:

Same deal regarding observing an airplane flying at 600 mph (268.224 m/s). For the person watching the plane, for a plane's passenger, pilot, or cocktail and peanut server to observe one unit of time, us watchers observe 1.0000000000004 (twelve zeroes) units of time.

In archery, archers aim their arrows slightly to the side, instead of directly at the target. On the surface, that seems crazy. This is where the Archer's Paradox comes into effect.

Other factors to making accurate shots include the stiffness of the arrow, brace height, and wind conditions. I found this video by Billgsgate helpful:

Galactic Coordinates are spherical coordinates that are set such as:

Using Wolfram Alpha ( http://m.wolframalpha.com ) and an online coordinator converter ( http://ned.ipac.caltech.edu/forms/calculator.html ), here are the 30° longitude markers when latitude is 0° (b = 0°):

Surprisingly, the object is far from the vertex.


Forgive me if I repeat things. Instead of going out to clobber everyone last Black Friday for that extra 10% off, I stayed home and cracked open some books that I have been meaning to look at for months. I hope you find this enjoyable and insightful.

P.S. I was thinking about adding a section (or blog entry) about the age of Aquarius and some of the head scratchers I have about it. I am not sure if this subject would be appropriate for this blog. If you have any thoughts about this, or anything else, go and ahead and comment! - E.S. 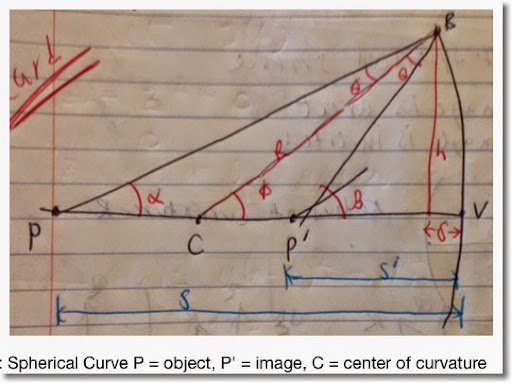 
Stars and celestial objects have the equatorial coordinates ( α, δ, R ) where:

For completeness, here are the conversion formulas to from cartesian to equatorial coordinates:

The distance formula between two points in space is:

Find the distance between Sagittarius A* (center of the Milky Way Galaxy) and the Andromeda Galaxy (M31).

Converting to the cartesian system:

The distance between Sagittarius A* and the Andromeda Galaxy is about 2.583 million light years.

Happy Thanksgiving, or Day of Thanks, wherever you are. Please be safe and use good judgement. We need all the positive we can get on Earth, and in the cosmos. Cheers!

Using the definition of the integral:

2. We need f(z) to integrate. Separate f(z) into its parametric parts.

Let's look at a couple examples.

This is the basics of line integrals. 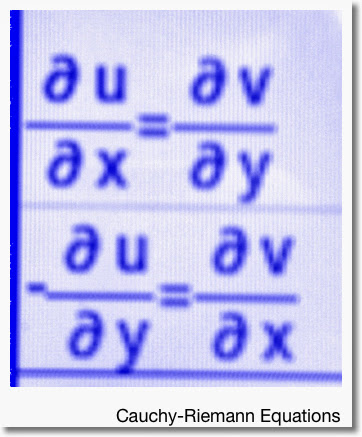 Continuing my blogging adventures at the Last Drop Cafe in Claremont, CA:

Let the complex-valued function f(z), where z = x+i*y, be defined in the parametric form:

Then by the definition of the derivative:

Taking the real and imaginary parts of (I) and (II):

The Cauchy-Riemann equations can be used to determine whether f(z) is differentiable and if so, where.

Since the Cauchy-Riemann equations hold, and without restriction, then z^2 is differentiable for all z. And:

Since the Cauchy-Riemann equations hold, and without restriction, then e^z is differentiable for all z. And:

I used (I), but using (II) will garner the same result.

That is the Cauchy-Riemann equations in a nutshell!

As always, have a great day! Take care. Eddie

Complex Analysis: The Conjugate, the Modulus, and its Properties 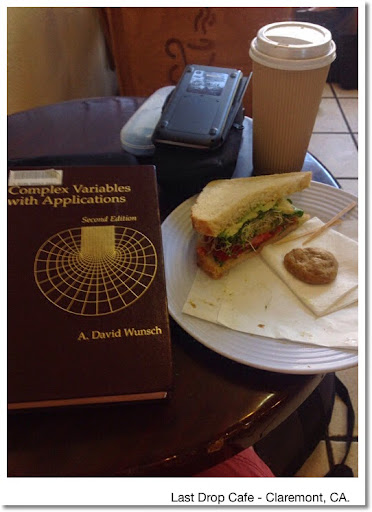 Blogging today from Last Drop Cafè in Claremont, CA. I think I found a new favorite drink: mint mocha made with soy milk.


Here are some basics of the conjugate and modulus of complex numbers.

Usually labeled "z-bar" (z with a line over it), the conjugate is also labeled conj(z) and z*.

Not surprisingly, the modulus, also called the absolute value of the complex number z is defined as:

Let's explore some properties of the conjugate and modulus.


Today we will develop formulas that determine the chance of landing a dart in a specific scoring zone.  For this, we will assume that all the darts thrown will land in a specific area.  The dart that hits the cat who are unfortunate to be in its path don’t count.

Area of a Circular Ring


We will be using the area of a circular ring heavily in this blog.  The general formula for it is: 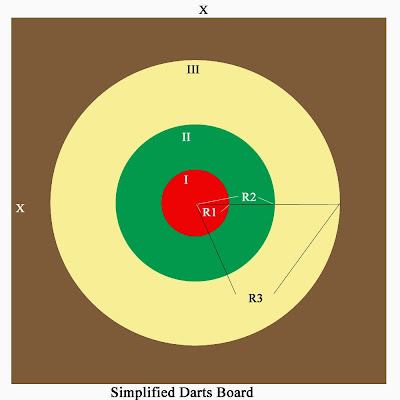 
A dart that lands outside any of the scoring areas scores no points.


Assuming all but a negligible of parts hits the square board, the chance that a dart hits the bulls-eye is:


The probability that a dart hits the green scoring area:


The probability that a dart hits the yellow scoring area:


Finally, the probability of scoring anything at all on this board is: 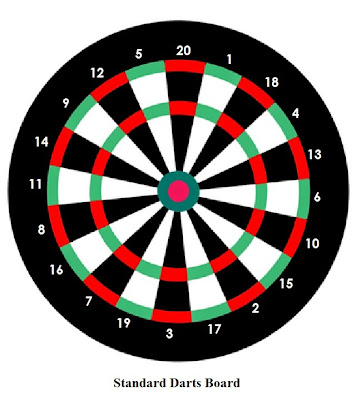 The standard darts board is a circular board with radius R. Going from the inside out, we have:


(III)             Inner Single Ring.  From here on out, the board is divided into 20 zones, with each zone assigned a different amount of points from 1 to 20 (not shown on the diagram).  Here I am only concerned with the circular ring in general.  This ring has the outer radius of R3 and inner radius of R2.

Here, I am concerned about hitting the general scoring areas.


Probability of hitting a double ring:


Probability of hitting a triple ring:


Probability of hitting the bulls-eye:


The highest a single dart can score is 60, hitting the 20 zone in the triple ring.  Note the triple ring is divided into 20 zones of equal area.  The required probability of scoring 60 points is:


Knowing the area of the circular ring is key to calculating probabilities of hitting areas of the dart board.

This entry is property of Edward Shore. 2014.