HP Prime and TI-84 Plus CE: Base 10 (Decimal)-Base 12 (Duodecimal/Dozenal) Conversions

HP Prime and TI-84 Plus CE:  Base 10 (Decimal)-Base 12 (Duodecimal/Dozenal) Conversions

Enter the integer as a number.

Email ThisBlogThis!Share to TwitterShare to FacebookShare to Pinterest
Labels: base 10, base 12, base conversions, decimal, dozenal, duodecimal, HP Prime, integers, TI-84 Plus CE

Base 12 is a numerical base system that is based on the powers of 12 instead of 10.  The number line would like:

Converting from base 10 to base 12 involves dividing the number by the powers of 12.  For example, 188 in decimal,

There are a number of advocates for replacing Base 10 arithmetic with Base 12 arithmetic.  Two of the prominent groups are:

I also found a number of videos on YouTube who extols the virtues of Base 12, including:

So why base 12 instead of base 10?  The Dozenal Society of America argues that the dozenal way of counting was arrived by societies worldwide:

*  Bakers sold baked goods in twelves
*  Rulers (non-metric) are usually a foot long divided into 12 sections (inches) – used by carpenters
* Historically, pharmacists and jewelers divided a pound into 12 ounces (the pound in this sense is called an Apothecary pound)

I will add that we have 12 months in a year, non-military clocks have work in 12 hours (with an AM/PM indicator), and in most astrological practices where Ophiuchus the Serpent Bearer isn’t included, there are 12 signs of the zodiac.

Base 12 would also facilitate counting, instead of using two hands and their fingers, people would count using the twelve phalanges of a single hand, where the thumb is used as a counter.   One hand can represent singles while the other represents dozens.

Thankfully, the symbols for digits 0 through 9 are retained. Unlike hexadecimal representation (Base 16), there is no uniform consensus of how ten and eleven are represented in Base 12.  Symbols include:

*  A for 10 and B for 11.  These symbols would align with the hexadecimal representation.

*  An upside down 2 for 10 and upside down 3 (Ɛ ) for 11.  In Microsoft Alt codes, the   Ɛ is associated hexcode 0190.  These symbols are popular in Britain.  No offense, but personally, these are not my favorite as look confusing and too close to the 2 and 3 we have.

*  One suggestion is to use T for 10 and E for 11.  In this video Bon Crowder explains the digits of Base 12:   https://www.youtube.com/watch?v=BJRYCwl5Rgw

* Another set of symbols are called dek (χ ) for 10 and el ( Ɛ except the bottom line is flat) for 11.  These two symbols have been suggested by William A. Dwiggins, and is used in The Dozenal Society of America’s publications.  For typing on the computer, the capital letter X stands for dek and capital letter E for el.

For the purposes of this blog and the tables presented, I will use X for 10 and E for 11.

Let’s compare how the basic operations addition and multiplication work in both decimal and dozenal.

Below is an adding table (jpeg image) for numbers 1 through 12 represented in both Base 10 and Base 12. 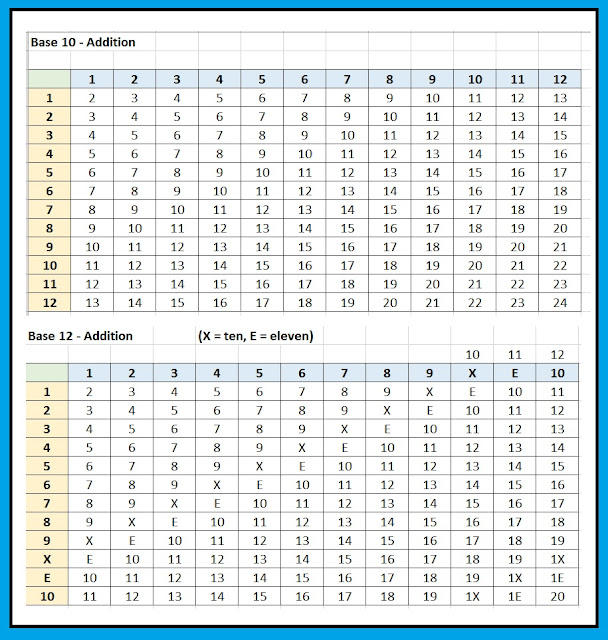 Below is a multiplication table (jpeg image) for numbers 1 through 12 represented in both Base 10 and Base 12. 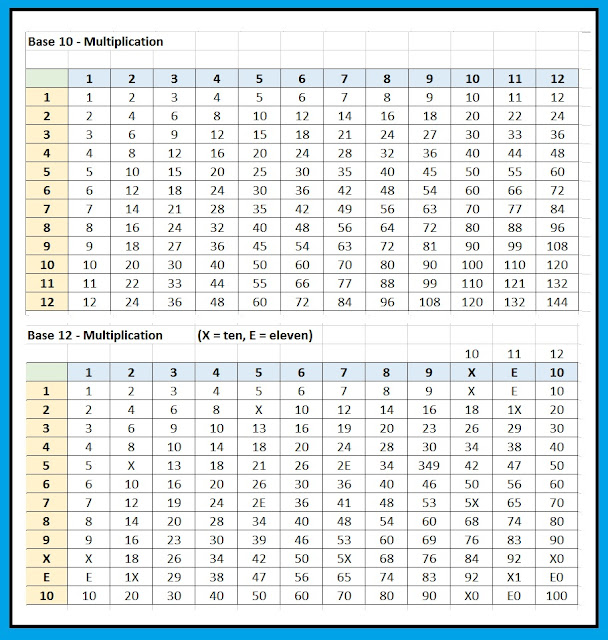 Here are some common fractions listed below in both decimal and dozenal systems.  Note the interesting patterns for 0.1 to 0.9 (the table to the right).

You can find representations of π to 100 places here:  http://turner.faculty.swau.edu/mathematics/materialslibrary/pi/pibases.html

What do you think, would a dozenal, base 12 system work for you?  Should it replace base 10 in everyday mathematics?  Personally I find value in both systems and the ability to quickly double and halve is partially base 10 has survived as the dominant base system for centuries.

A Platonic solid is one of five three dimensional objects consisting of regular polygons which all faces are identical and perfect symmetry is achieved at each vertex (corner).  The five Platonic solids are classified by the number of faces they have:  tetrahedron (4), hexahedron (aka cube) (6), octahedron (8), dodecahedron (12), and icosahedron (20).

In 1596, Johannes Kepler wrote Mysterium Cosmographicum (The Cosmographic Mystery).  Based on the Copernican system (which considered our Sun as the center of the Universe), Kepler attributed to structure of Solar System with Platonic Solids.  Each planet had its own corresponding sphere where its orbit was located.  Each of the Platonic solids were placed so that they were inscribed and circumscribed by the spheres.  The order went like this:  Mercury, Octahedron, Venus, Icosahedron, Earth, Dodecahedron, Mars, Tetrahedron, Jupiter, Hexahedron, Saturn.  (Uranus and Neptune were not discovered at this time). [4]

Below is some basic geometric and some eccentric information for the Platonic solids:

The first month of 2017 is almost in the books.  Until next time,

Circle:  Relationship between Area and Circumference

Sphere:  Relationship between Area and Circumference

Let a (small a) be the length’s side.   Then the area of the triangle:

The next blog will cover Platonic solids.  At least that’s the plan.  Have a great rest of the weekend.

My late Uncle Ralph bought a TI-60X for me in 1992 (I think it was in ’92).  It was my first year of high school.  Uncle Ralph encouraged my love for calculators. (Thanks for all you did for me Uncle)

The TI-60X operates in Algebraic mode.  Simply, type in the expression as its written, and press [ =/ENTER ].

The TI-60X isn’t programmable in the traditional sense (keystroke or BASIC) but rather you can store formulas (A = π * B^2, for example) for later use.  I think the TI-60X is the first of its kind to store formulas.  Today, formula storage is a feature of the Sharp EL-520W.  More on this later.

You have your standard linear regression capabilities.  However, instead of the usual labels a, b, and r, you have ITC (intercept), SLP (slope), and COR (correlation) respectively.  If find these labels much helpful since calculators sometimes tend to switch the roles of a and b in linear regression mode.  Entry is rather easy, just enter the data point and press [ Σ+ ] and you are good to go.  No separate declaration of stats mode needed.

The Base conversions are on the TI-60X as well.  We also get the logical functions AND, OR, XOR, XNOR, NOT, and 2’s (compliment).  The TI-60X distinguishes the variables A-F from the hexadecimal A-F by assigning the latter set to the 3rd functions of the reciprocal, square, square root, and the trigonometric keys.  On the screen, hexadecimal letters are in bold while storage registers are not.

Fractions are included, as well as the decimal to/from fraction conversion.  The TI-60X has the following additional conversions: 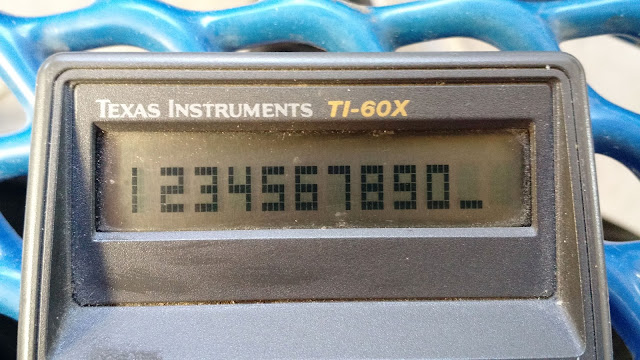 Can we talk about the display for a moment?  The text on the TI-60X’s screen is blocky.  According to the Datamath Calculator Museum, the character layout is 5 x 4 dots instead of the usual 7 x 5.  This display could be a throwback to the calculator display of the 1970s and 1980s where the numbers were made of linear segments.

When the “SOLVE YN?” and “REVIEW YN?” prompts appear, the plus key acts as NO and the equals keys acts as YES.

Integration is pretty easy.  At the appropriate prompted variable, press [2nd] [ , ] (dx) to insert the dx indicator.  You will be asked for a lower limit, upper limit, and the number of intervals.  I am assuming Simpson’s method but I’m not 100% sure.

Simultaneous equations of 2 x 2 and 3 x 3 linear systems are offered.  Execution takes up 2 or 3 registers respectively.   Solutions are stored in X, Y, and for 3 x 3 systems, Z.

Enter the formula:
Change to Radians mode by pressing [3rd] [LOG] (DR>) until the R indicator is displayed.

For what it’s set out to do, the TI-60X accomplishes it rather well.  The calculator is rich with features and there is some storage for some formulas.  I also like the bolder blocky numbers in the display, they are easier to read.  I think the TI-60X launched the advanced scientific calculator genre which is now common place.

Yes, this calculator is worth collecting.  I’m not sure what the prices are to purchase a used on from eBay, Amazon, or other shopping website, but I imagine it’s not expensive.  (I think the 60X was about $30-$40 when it was sold new back in the 1990s).

Thank you for comments and support.  Until next time,