If you have a subroutine, you can program the main algorithm and any subroutines in one program file.  In this method, a single subroutine can be executed up to 36 times.  The programming language for Casio allows up to 37 labels: 0 through 9, A through Z, and θ.

1.  Know how many times the subroutine is to be executed.  This is the key.

2.  We will need to set aside a variable to keep count.

4.  Each time the subroutine is executed, increase the counter by 1 and execute a jump test by using ⇒.

5.  Finish the main portion of the program with the Stop command.

You can make this a simple or complex as you want.  Below are two sample programs, LOOP1 and LOOP2 that illustrate this technique.


Now for a more detailed example.

LOOP2:   This program splits two positive integers of equal length (example: 4326 and 1821, both have four digits each).  Carry over is included and the result is returned in a list of digits.

Have fun and happy upcoming December!

Note: Use two-digit addresses for the regular HP 12C.

A Word of Thanks

I am grateful to all of you readers, for all the comments, compliments, questions, and for reading my blog and getting enjoyment out of it.  This blog is one of my joys in life and I am grateful that I can share this with you (for over seven years, wow!)!

Happy Thanksgiving!  Much love and blessings,

The Chinese Remainder Theorem deals with solving the following congruences:

We are going to focus on the two congruent system:

where the solution is x mod s*u.

To solve the Chinese Remainder Theorem, use the function inchinrem.

Syntax (reference (I) above):

TI 84 Plus: Expressing an Integer as a Sum of Powers of Two

TI 84 Plus:  Expressing an Integer as a Sum of Powers of Two

The program POW2SUM expresses a positive integer as a sum of powers of 2.  The program generates a list of terms.

The powers of 2 are:

Note:  The list includes a 0 (due to programming limitations on the TI-84 Plus).

Email ThisBlogThis!Share to TwitterShare to FacebookShare to Pinterest
Labels: integers, number theory, Programming, sums of the power of two, TI-84 Plus

To see the derivation of simplification and examples, please check out this blog entry:

Input is the form of:

to an expression that involves only one trigonometric function. 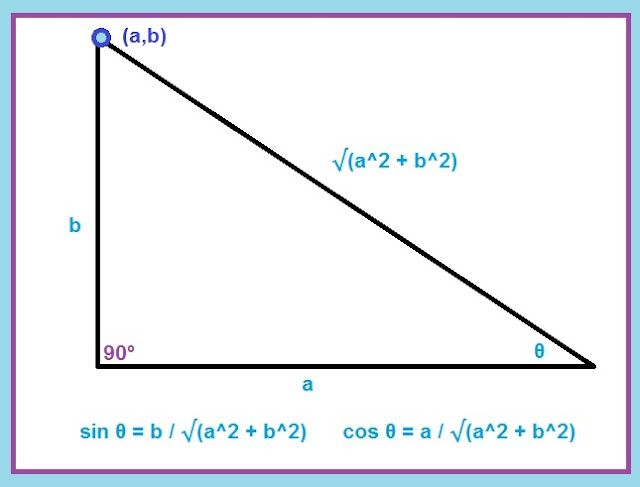 1.  The angle θ dependents on what quadrant the point (a,b) is.

2.  Taking into consideration of where the point (a,b) is and the expression √(a^2 + b^2), the task of finding the coefficients of reduced formula for a * sin x + b* cos x can be achieved by calculating a rectangular to polar conversion of the point (a,b).

The goal is to solve the equation for n:

One way to do this is to use a variation of the gamma function which invovles an improper integral:

Or use an approximation formula.

Another approach is to use an iterative method, which does not use calculus.  Hence, if x and n are integers then x can be written as:

Where r is a remainder.  This method involves successive division.

HP Prime: The Period of a Pseudo Random Number Generator

HP Prime:  The Period of a Pseudo Random Number Generator

Most scientific calculators, mathematical programs, and spreadsheet programs will have random number generators that will generate numbers at random.  The most common generator is a one that produces numbers between 0 and 1.  Additional random functions will also allow the user to generate random integers and random numbers that fit the normal distribution.

It wasn't always this way.

In the 1970s and into the 1980s, scientific calculators and some computers did not have random number functions.  This facilitated a need for pseudo random number generators, hereafter noted as PRNG, which date back to the 1940s.  PRNGs used recursive functions to generate random numbers between 0 and 1.  Several examples include:

You select a seed, which the RPNG starts generating random numbers.  For example, using the PRNG of x_n+1 = frac(147 * x_n) with a seed of π/3 generates the random numbers: 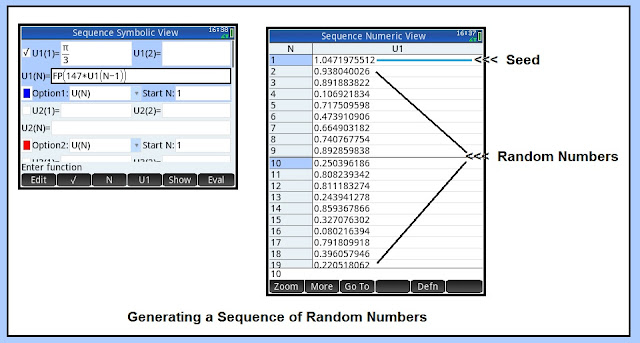 The program sets an arbitrary maximum limit, set in the code of 50,000.  If the count reaches this limit, then the period of the generator is at least this maximum, possibly infinity.  You may change this limit as wished.  Thankfully the HP Prime's processor is fast, so the calculator can handle many interactions quickly.  Older calculators will require more time.

Note:  In the rngf(x) subroutine, you can insert any pseudo random number generator you want.

If the seed is picked with one decimal point (0.1 through 0.9), the period is only 4.  That means, the generator cycles only 4 numbers before repeating again, with the exception is 0.5, which period is only 1.  Specifically:

You can see the repeating periods below. (click on the picture below)

For simple PRNGs, you are going to a seed with many decimal places to be able to generate different random numbers.

A nested radical is a radical of the form:

A expression of radicals (not necessarily square roots) that contains radicals or surds (unresolved n th roots).  Example of a nested radicals include:

This blog entry will deal with the denesting the following:

√(x + y) and √(x - y) where x and/or y is a radical.  Let's assume that x > y and only principal roots are calculated. We're looking into a neat process that is used in computer algebra systems.

We want to obtain the following and determine a and b.


Start by squaring both sides of (I):


We have the following simultaneous equations set up:

Solving the system in (VII) for both a and b yield: 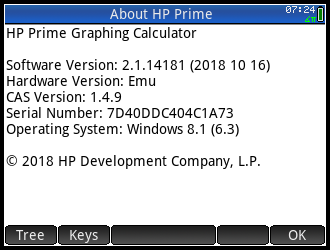 The newest firmware update (version 14181) is now released.  Changes include:

* Large matrices, strings, and other objects will now be displayed with an ellipsis (...).  To see the full object, scroll up, select the big expression and press on the soft key (Show).

Link to the updated firmware:  ftp://ftp.hp.com/pub/calculators/Prime/

Hi everyone, I am Edward Shore, author of Eddie's Math and Calculator Blog, and I am joining Derek Theler on the JDRF walk at the Rose Bowl.

The walk is to raise funds for research to find a cure for type 1 diabetes.  The walk will be on November 4, check in at 8:00 AM starting at 10.

The walk is 5 kilometers which is approximately 3.11 miles.

Hope to see you on Sunday and thank you for your support.