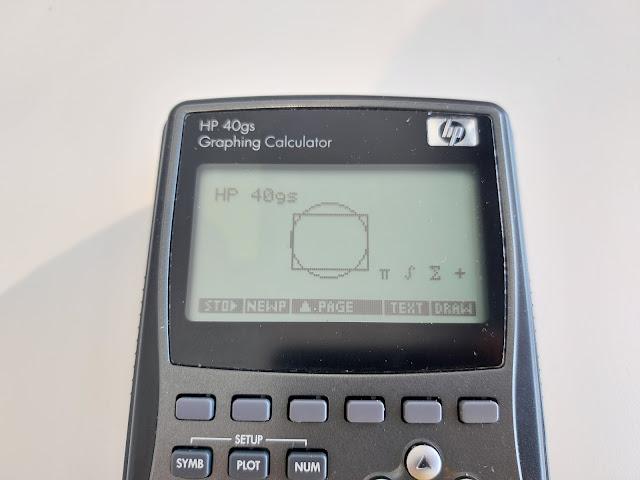 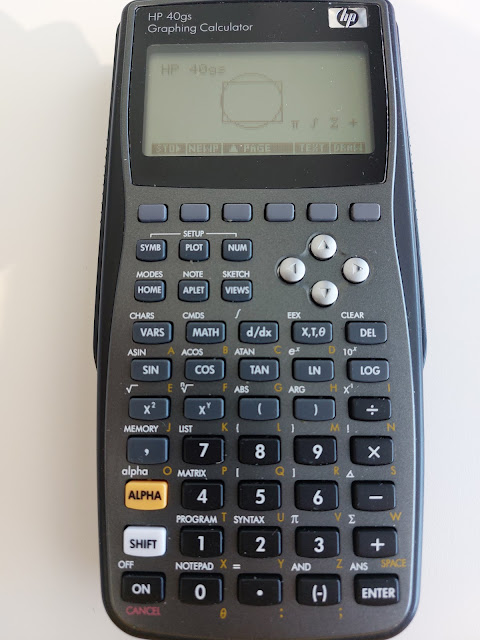 *  Conversions and library of scientific constants

A great feature is the HELPWITH command, as called with the keystrokes [ SHIFT ] [ 2 ] (SYNTAX).

Another challenge is that the double quotes and single quotes are not available directly from the keyboard, and must be accessed through the CHARS menu.   In regular calculation, this may not make much of a difference, but in programming, it makes a big difference when it comes to messages and prompts.   The alpha-lock is regulated to a soft key. 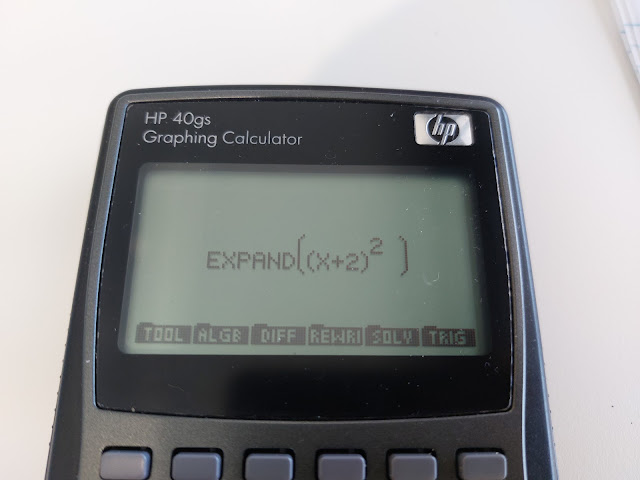 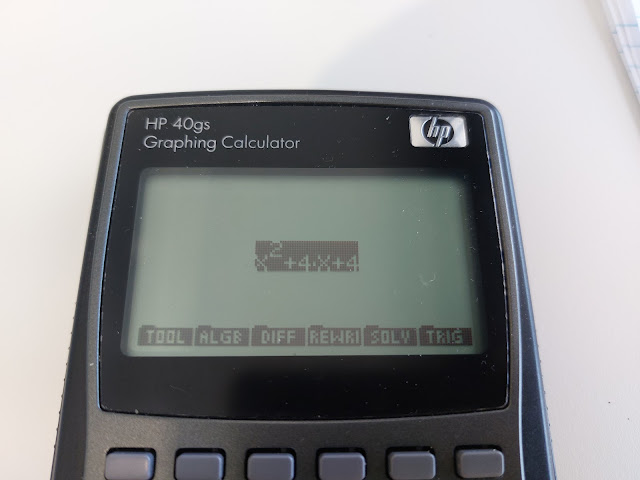 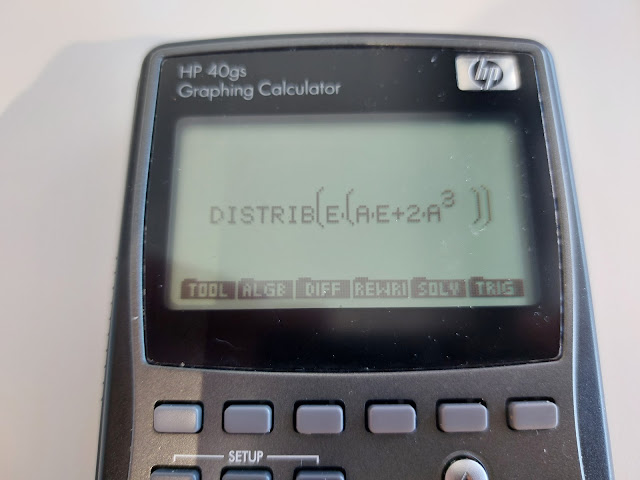 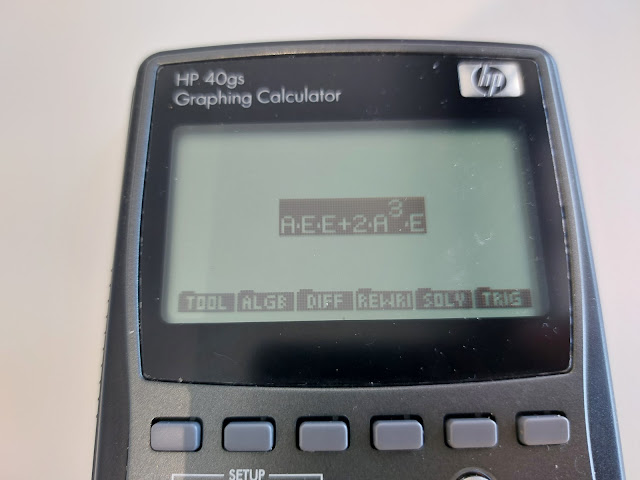 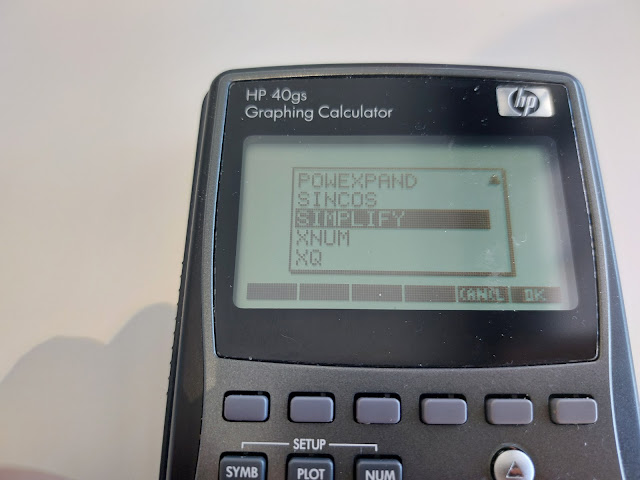 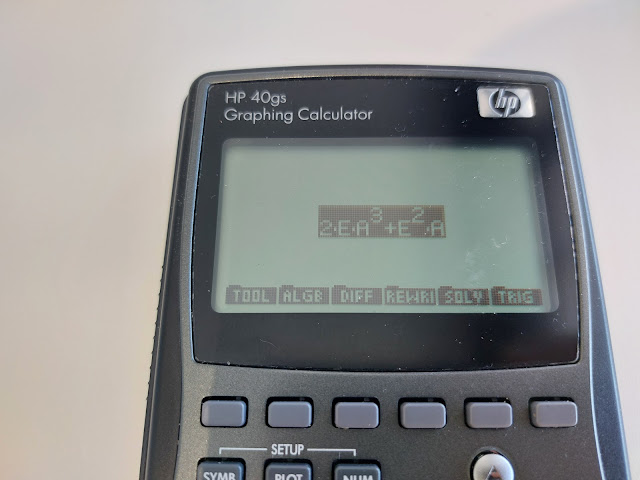 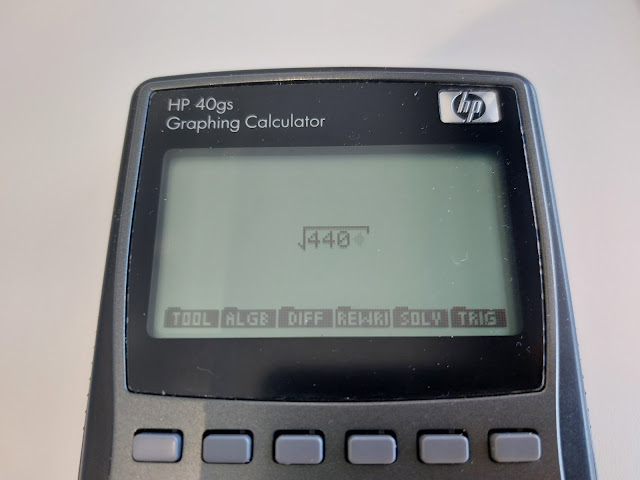 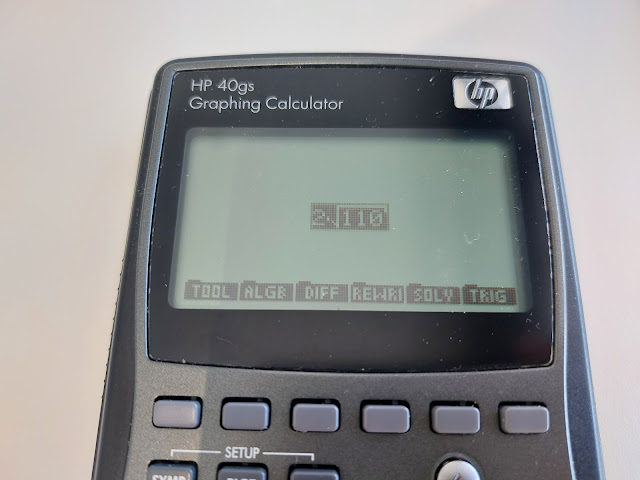 Aplets are the HP 40gs' applications which includes:

*  Sequences: Plot up to ten sequences, U#(N), with one or two initial conditions

*  Solve:  Store up to ten equations, solve for any one at a time

*  Statistics:  Statistics for 1 or 2 variables.  In 2 variable statistics, 8 regressions plus a user-defined

Aplets can be modified and copied.

The program language of the HP 40gs is the same as the HP 38G/39G series.  Each line, except for the last line, must end with a colon (:).   Arguments are separated with a semicolon (;).

The learning curve of the programming language is little complex, especially when it comes to setting views and customizing aplets.   Thankfully the user guide is thorough, so make sure you have the book or the pdf download, which you can access here:

Generate a list of random numbers of length N.

Asks for A, B, and C in a quadratic equation and stores it to the Function F0(X)

Note:  This language is similar to the later HP Prime, which most line ending with a semicolon.

A Predecessor to the HP Prime?  Final Thoughts

A lot of the features and structure of the HP 40gs would be present in the HP Prime:  among other things, a solver, program that can select aplets (apps) and set custom views but most of all, a separate CAS mode.

The HP 40gs is a nice calculator with a ton of features.  I think the HP 40gs was rarely available in the United States because of the CAS mode, because like the HP 39gs, the 40gs is aimed towards the education market.  The key contrast could be better and adding the quotes to the keyboard would be nice.

The HP 41C and HP 42S families, including the Swiss Micros DM41, DM42, Free42, and Plus42, includes the ability to execute storage arithmetic on any of the four* stack levels X, Y, Z, and T.

*Some calculators allow for a bigger number of stack levels, like 8.

In Version 19,  lists were added as an object in the Numworks calculator.  We can define and name lists with any values that we want. Lists are designated by the brackets { }.

*   The values can be real number, complex numbers, numbers with units, scientific constants, and combinations of those types.   What is not allowed in lists are strings and matrices.

*  The indexing of lists starts with 1.   We can call a list's elements by the parenthesis after the list name.  For example,  xlist(10) recalls the 10th element of the list xlist.

*  Once a user defined list is created, the individual values cannot be changed.   Furthermore, there are no augment or delete commands.  In this sense, user defined lists acts like tuples in Python.

*  Lists can be recalled in the Statistics and Regression apps.   The system named lists V#, X#, and Y# are updated accordingly.

* Defining a list of random values will always change the randomized values every time a user defined list is recalled.

Please note that this is for Version 19.2.

Screenshots are captured using the Numworks Emulator on July 10, 2022:  www.numworks.com/emulator 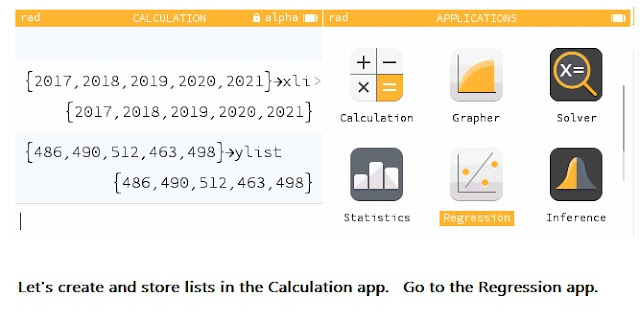 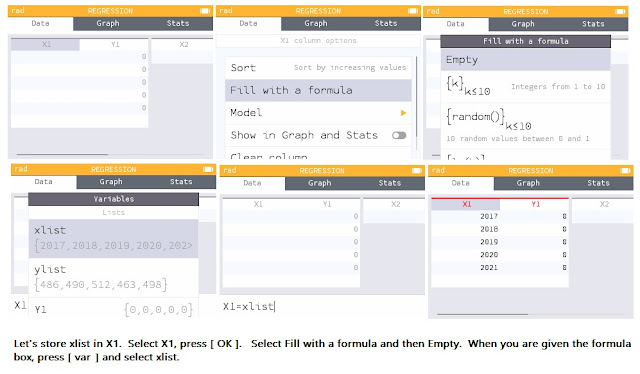 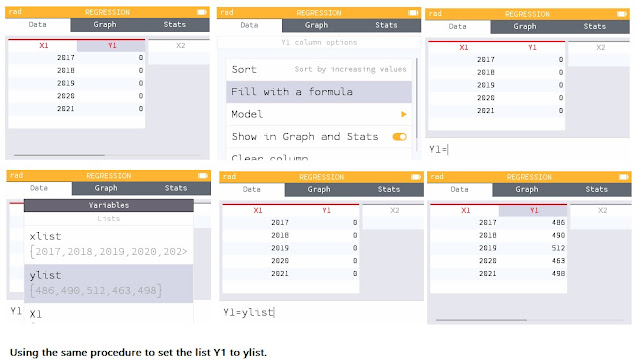 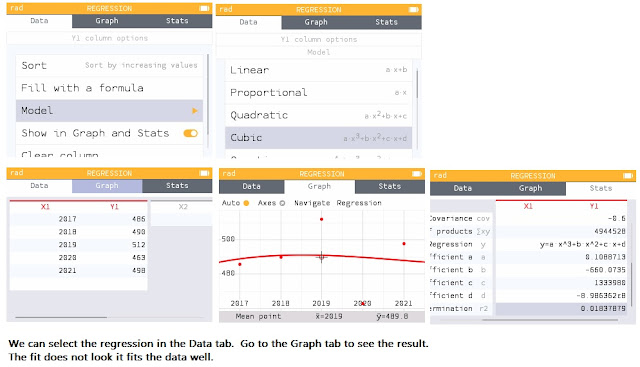 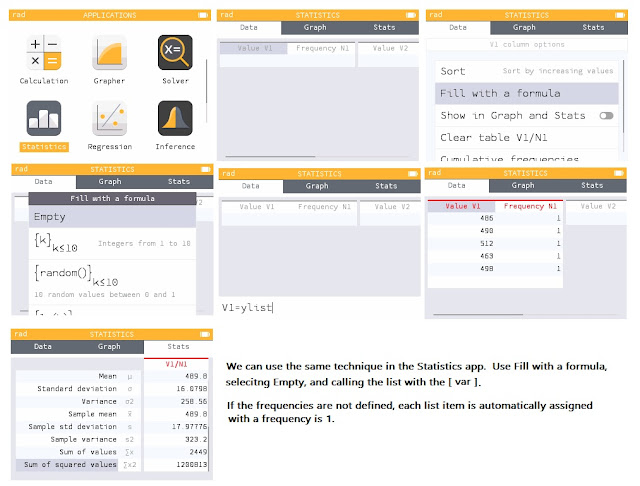 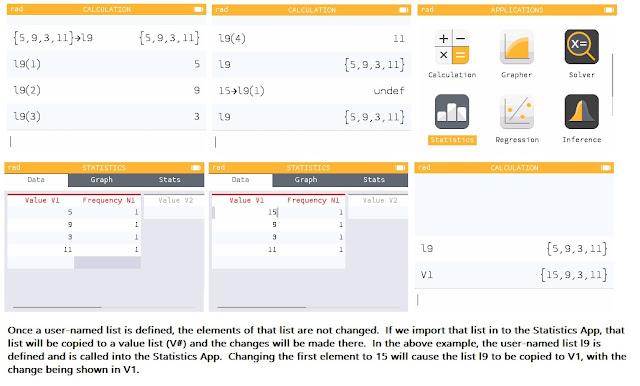 Rewrite the Quadratic Polynomial 1 + A*x + B*x^2 as a rational function of polynomials.  A and B are real numbers (however, this should work if A and B were complex numbers).

Again, we have transformations that are trivial.

The relationship between A, B, C, and D are all connected in this case.

Plus42: The Solver SEQ Command

Plus42: The Solver SEQ Command

In the calculator app Plus42, we can evaluate a sequence of calculations to return a result.  The SEQ is also good for the FOR loop because it allows us to initialize several variables.

I think this is best illustrated by example.

The commands listed in the SEQ are:

The answer is stored in P.

The commands listed in the SEQ are:

In this example, SEQ is in a FOR command and is used to initialize variables.

If you have not checked out the Plus42 app, please check it out.  The Plus42 is an HP-42S Simulator which builds up on the Free42.   However, the Plus42 adds the solver in a style of the HP 17B and 27S, graphing commands, and units.

It's rare, but there are nursing-based calculators that are available in the market from time to time.  Here is a review of one.

The calculator that I ordered came in an ecology-friendly package, with the calculator wrapped in a bubble wrap pocket.  Unfortunately, it does not have a hard sliding case or the calculator being in a wallet.

The calculator casing has a nice silver finish with white keys. 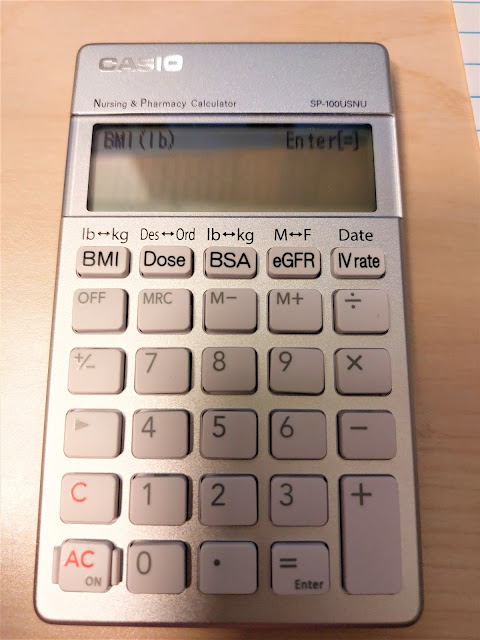 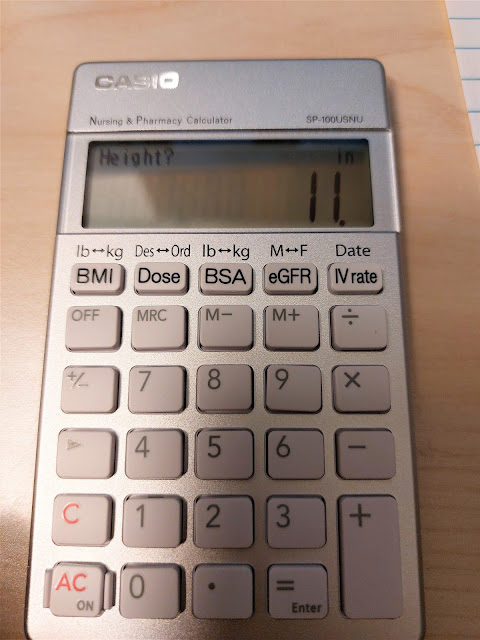 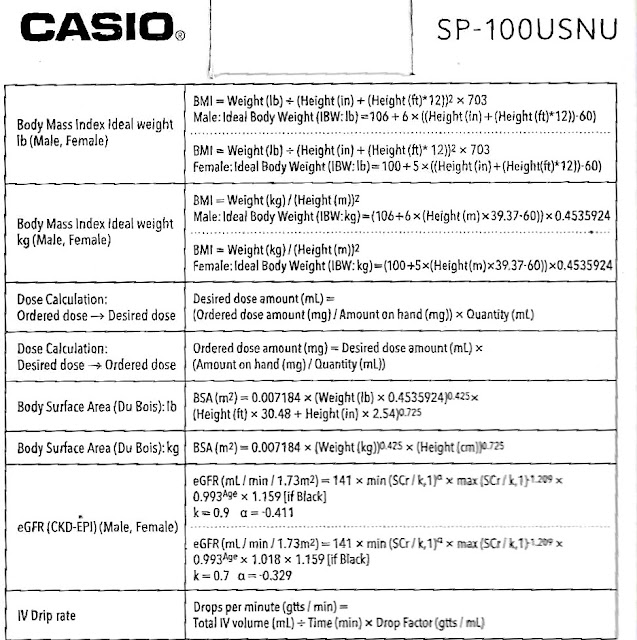 A Calculator for the Nursing and Pharmacy Industries

The SP-100USNU is built for the nursing and pharmacy industries.  Five of the keys deal with six calculations, which each of the top keys serving as a toggle.  What is great about the SP-100USNU is that the calculator gives prompts and menus as necessary.  The display is crisp and clean.

[ eGFR ]:  Calculate the estimated glomerular filtration rate which assist in diagnosis of chronic kidney disease.   The CKD-EPI equation, which factors a person's skin color (black vs. non-black), sex (male vs. female), weight (for body surface area), creatinine secretion (mg/dL), and the person's age.  What is calculated?   CCr, Creatinine Clearance, in mL/min and eGFR, estimated glomerular filtration rate, in mL/min/1.73m^2.   The average body surface area is estimated to be 1.73 m^2.

IV Drip Rate:  three inputs are needed.   Volume of medicine in mL, time that the IV lasts in minutes, and drop factor in gtts/mL (typically 15 - 20 gtts/mL).  gtts stands for number of drops.  The drip rate is given in gtts/min.

1.  Before:  calculate the date before the base date.

2.  After:  calculate the date after the base date.

3.  Period: calculate the days between dates.

Link to the manual, which has to be downloaded:  https://support.casio.com/storage/en/manual/pdf/EN/004/SP-100USNU_EN.pdf

The SP-100USNU is also a regular four function calculator.  Unfortunately neither the percent function (%) nor the square root function (√) are present.  I would think that the nursing profession would work with percentages. We do have memory calculations (M+, M-, MRC).

Also you may need access to a conversion table (via calculator, book, internet, all of the above) to do common conversions.   I would have loved to see that present here too.

During the prompts, we can execute side calculations before entering the required entry in the prompt.

I did not like the fact that that calculator does not have the % and the √ functions.  It would be nice if conversion factors were included (especially with the money).  However, the formulas included make a great specialized calculator.

The program calculates the gamma function for any real positive number in tenths by the multiplication recursion:

The code is defined as a function.

# round integers for accurate results!

Plus42 and Casio fx-9750GIII: Magnetic Flux Density of a Solenoid

Plus42 and Casio fx-9750GIII:  Magnetic Flux Density of a Solenoid

A solenoid is an electromagnetic coil or wire that controls a magnetic field.  The solenoid is a key part of the automobile starter. 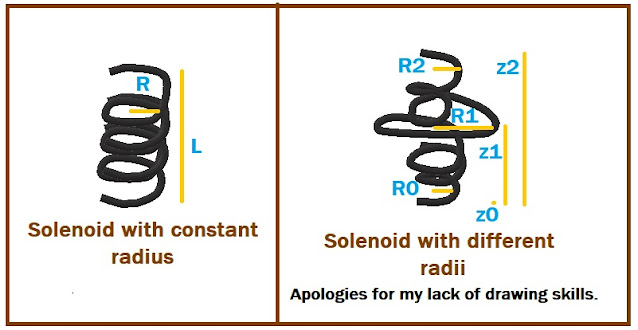 Constant Radius:  If the solenoid has a constant radius, the simplest case, the magnetic flux density is calculated as:

μ0  = permeability in a vacuum.   More about this later.

I = current in Amps

Various Radii:  If the radii vary in the solenoid, we can calculate the sum of the magnetic flux density per each point z_i and radius R_i.

The μ0 represents the permeability in a vacuum, and traditionally, it is a constant defined as:

However, CODATA has a slightly different value assigned, here is the May 2019 value:

Since the traditional value is reasonably close, I am going to use it the programs presented here.

Use a register to store and sum B_i.

This blog entry is dedicated to Chris B.

Essentially, the Texas Instruments TI-36X Pro and the TI-30X MathPrint are functionally equivalent.  What makes the two calculators different?

*  The TI-36X Pro is sold in the United States and in lot of the world, with the TI-30X MathPrint is sold primarily from Europe.  I ordered my TI-30X Pro MathPrint from the United Kingdom.

*  Thanks to the body of the calculator being curved, the TI-36X Pro is slightly bigger than the TI-30X Pro MathPrint.

*  The screen on the TI-36X Pro is a curved trapezoid, while the screen of the TI-30X Pro MathPrint has is rectangular.

* The TI-30X Pro Math print has black characters, while the TI-36X Pro has blue characters.

Here are some pictures. 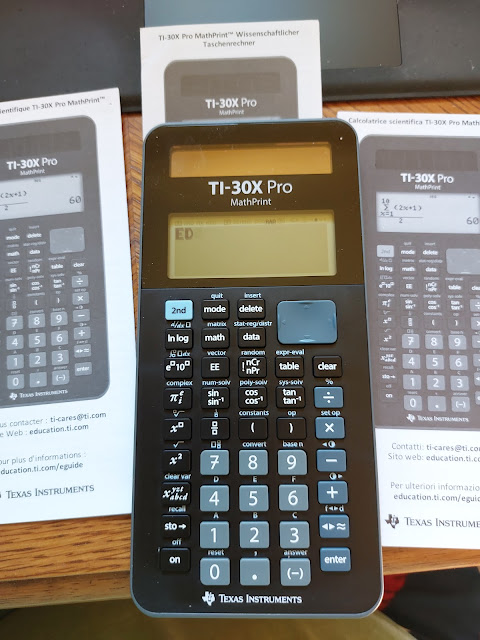 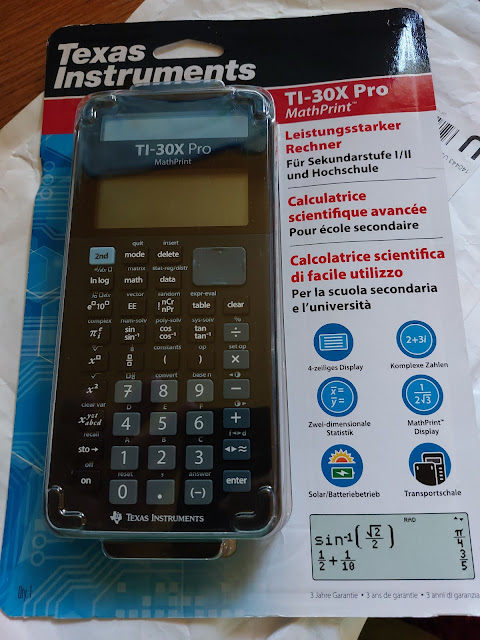 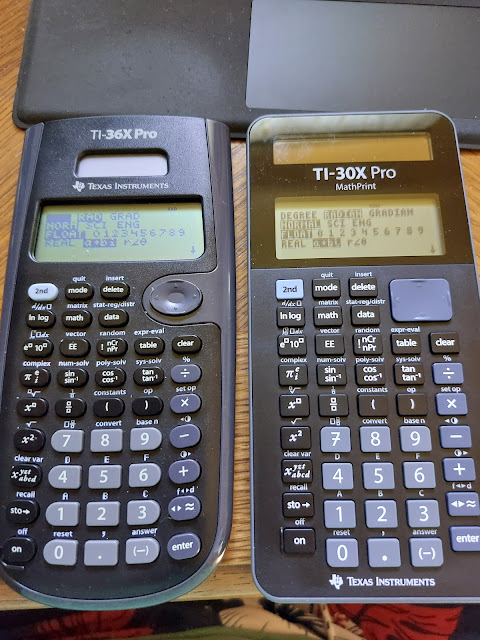 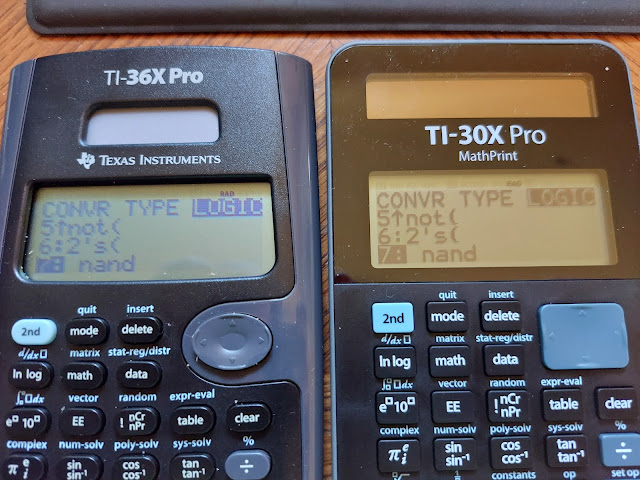 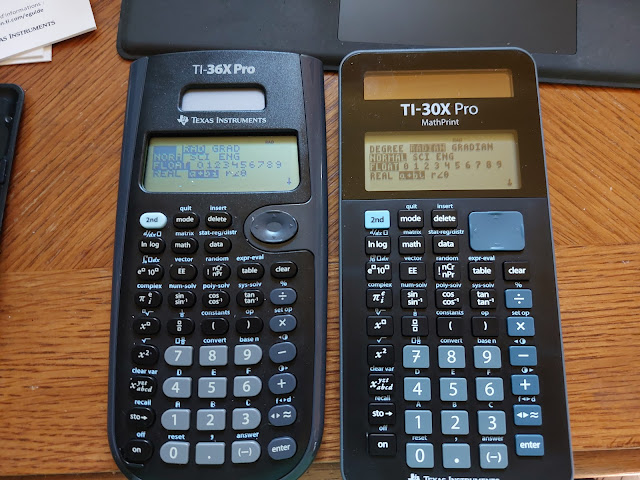 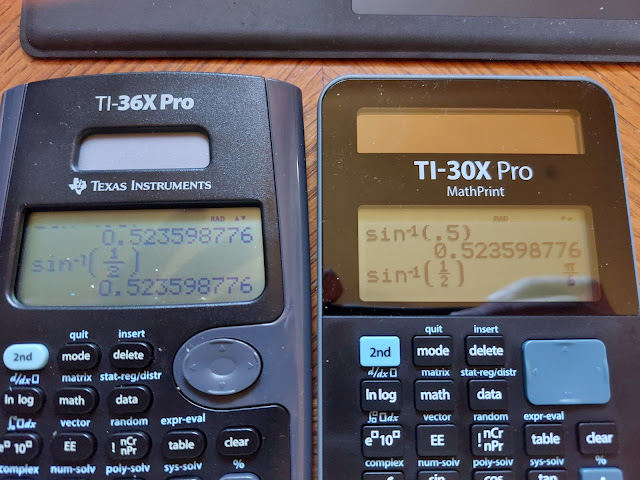 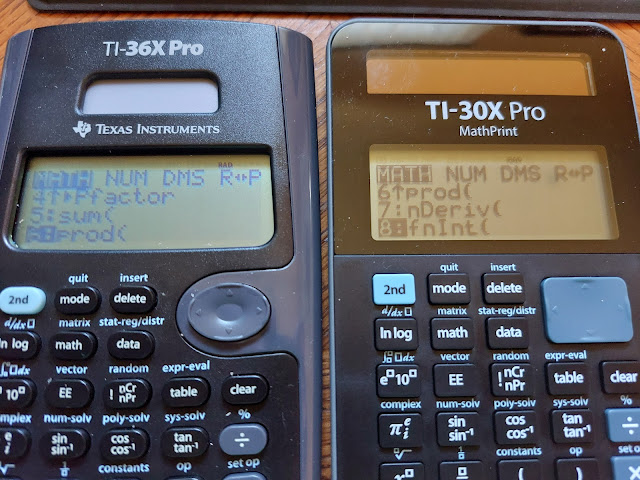 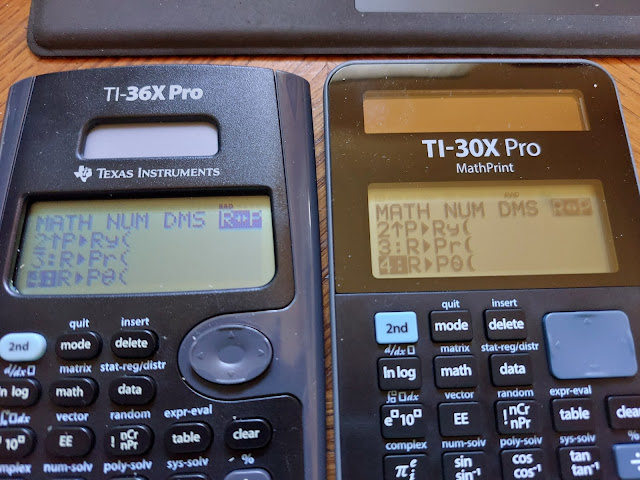 Either calculator is worth buying.  You  can see my review of the TI-36X Pro from 2011 here:
http://edspi31415.blogspot.com/2011/04/ti-36-pro-review.html
P.S. I still wish the TI-36X Pro/TI-30X Pro MathPrint had an alpha key instead of one key to press multiple times to get different variables.  That is my biggest gripe.
Eddie
All original content copyright, © 2011-2022.  Edward Shore.   Unauthorized use and/or unauthorized distribution for commercial purposes without express and written permission from the author is strictly prohibited.  This blog entry may be distributed for noncommercial purposes, provided that full credit is given to the author.
at August 08, 2022