Below are two examples of continued fractions: 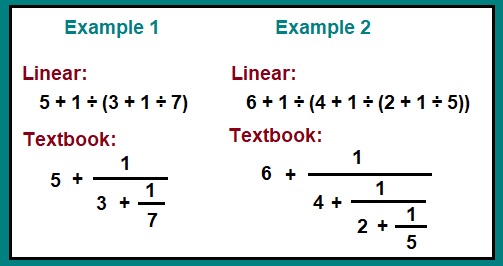 Example 1 (refer to the above):

Example 2 (refer to the above):

Example 1 (refer to the above):

Example 2 (refer to the above):

In the spirit of college basketball's March Madness, I will be posting a calculus post each day from March 16 to March 31, 2022.

Going On a Break

I am going on a blog break.  This blog is a one-person band, me, all done on spare time between family, a full time job, relationships, and possibly some house repairs.  I am grateful for everyone who reads, subscribes, and enjoys my blog, it is an absolute joy to do.

What Do I Take?

Imagine you are given a list of objects, which each object has its profit value and it's associated weight.  You are given a knapsack, which is also known as a backpack, which can carry a limited amount of weight.  Your task is to select the objects with the most value that can fit in the knapsack.

Please be aware, even with attempt to select the best choice at each step, we may still not have the optimal solution.

1.  The maximum ratio value of value to weight

2.  If the ratio is a tie, the maximum value

Capacity of the Knapsack:  stored in M

Total Value/Profit Made:   stored in P

A matrix showing which objects are selected, along with their weights, and value to weight ratio.   Columns are stored in List 14, List 15, and List 16, respectively.  Zeroes mean that the object is not selected.

The program starts with an intro screen created with several Locate statements and a For loop used as a "Wait".   This is 100% optional and serves to tell the user what program they are running.

I aim to give a title screen to programs when possible.

In the MENU-LIST function in the program editor screen, we can sort lists by using the SortA (ascending) or SortD (descending).   We can sort a list by itself, or a list using up to five sub-lists.  The sorted lists are saved automatically.

It's not perfect, but it's better than nothing.

By the way, the function can be found in the CATALOG in certain times:  in the program editor or in the RUN-MAT mode (main) if the Linear Input is selected.

The program on this blog entry are created and authored by Pierre Gillet.   Gratitude for his permission to post this on my blog.  The program FRAC will show successful approximations of fractions.  Note, the program uses 30 additional registers by the DimZ command.

Take it away, Pierre.

⦁ ?X is allowed on the fx-5800P:   When executed, the last value of X is shown which can be accepted or replaced. It doesn't work for the Casio graphing calculators.

⦁ The program works with the absolute value of X

⦁ The program uses 30 DimZ extra memories (from Z[1] to Z[30]) by default; If it's not enough, it will display "Dimension ERROR"

⦁ The program pauses displays pauses after each step, displaying 4 lines per step, until it suits you:

⦁ Result of the division of Numerator by Denominator

For example, at the 4th step with X=Pi, the program will display:

BUT you can bypass this using Locate <Column>, <Row>, <String or Variable>

Thank you to Pierre Gillet.

All original content copyright, © 2011-2022.  Edward Shore.  Programs provided by Pierre Gillet with permission, © 2022.   Unauthorized use and/or unauthorized distribution for commercial purposes without express and written permission from the author is strictly prohibited.  This blog entry may be distributed for noncommercial purposes, provided that full credit is given to the author. 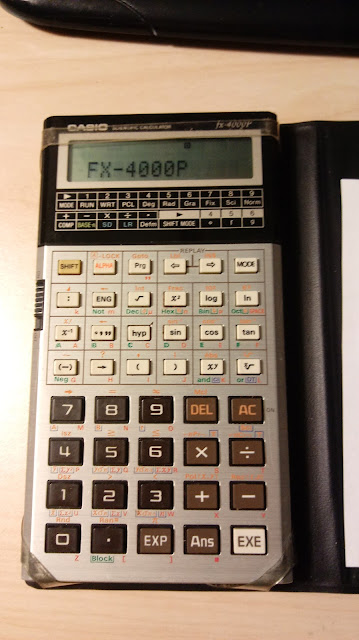 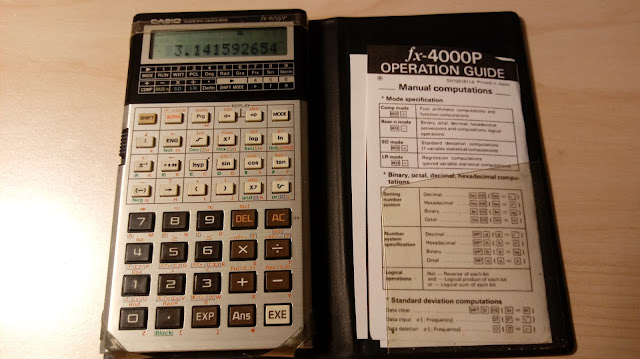 Logic:  Algebraic - type in expressions the way you write them

Memory:  Up to 550 programming steps or up to 94 memory registers

Wallet with operation guide (if included, depends on where you buy from)

The Casio fx-4000P holds up its value as it is a popular vintage programming calculator. Prices are about $30 US and above.

* BASE-n:  Base conversions in the standard four bases decimal, binary, octal, and hexadecimal.  Boolean functions and, or, not, and neg are included.   Binary numbers have a 32 bit capacity, in 4 blocks of 8 each.

As with many Casio calculators, the rectangular and polar conversions store their results in two variables.   For the fx-4000P:

This is the same as the Casio current fx-5800P.

The fx-4000P allows for indirect storage, which takes the form of:

letter[# of steps from that letter]

Z[1] returns what is stored in the 27th register,

Z[2] returns what is stored in the 28th register,

Z[3] returns what is stored in the 29th register,

Variables are allowed.  For example, if 2 is stored in I,  then:

The tilde command is allows us to store a value in multiple registers.  The tilde acts like a Fill function.

The programming mode of the fx-4000P has a capacity of 550 steps, which can be allocated into 10 slots, Prog 0-9.   The maximum step capacity is reached when the minimum of memory registers is set, 26.  (Defm 0).  The language is Casio Basic:

colon that ends each line (except for ◢)

increment var by 1 and skip next command if var = 0

decrement var by 1 and skip next command if var = 0

simple If/Then jump structure (displayed on the keyboard is a solid, bold arrow)

Prompting is a little different, as the string must be followed by a colon, then a question mark is used:

Example:   Prompt for the user to enter an angle and store it A.

We can display a string for a brief pause, simulating a Wait command by this:

Strings can also contain the characters engineering symbols k, m, μ, n, p (but not use these in calculations), a solid square, and the angle symbols °, ^r, and ^g (which also allow the user to override the current angle). Strangely, the symbols Θ and % are not included.

The use of Prog (key is labeled [Prg]) in programs will allow for the use of subroutines.  For subroutines, an implied Return command is added to the end of the subroutine.

To save space, use → without closing all the parenthesis.  The Ans (last answer) can also be used in between steps.   In COMP mode, pressing equals closes all pending parenthesis.

The programming structure of the fx-4000P, along with the fx-7000g and fx-6300g,  provide a base for future Casio programming and later graphing calculators.

(spaces and returns provided for readability)

P1:  Payment of a Mortgage

If you want to a series of programs for the fx-4000P and possible what they would look like for the fx-5800P/graphing calculators, please let me know in the comments.

The Casio fx-4000P is a good, entry level programmable calculator which includes a good amount of programming steps.

The fx-4000P reminds me of the current Casio fx-3650P(II) and what the latter lacks.   I wish the next incarnation of the fx-3650P had the integer, fractional, absolute value, and the ability to use strings with the full alphabet.   The only advantage the fx-3650P has is the derivative, integral, and fractions.

The fx-4000P runs decently fast and the screen has a big display of characters and results, and it holds up as a favorite.

TI-84 Plus CE Python (and TI Basic): Rounding vs. Truncating

TI-84 Plus CE Python (and TI Basic):  Rounding vs. Truncating

The program ROUNDING and the Python script rounding.py takes two numbers and estimates one of four arithmetic operations (+, - , ×, ÷).

Rounding:  rounds a real number to the nearest integer.  The traditional 5/4 rules are applied.  In the case of the integers:  for all numbers with fractional parts of 0.5 and above (to 0.9999...), the integer is rounded up.

Truncating:  the fractional part of the number is dropped.

This results are shown in text form (Python program) or stored in a matrix:

[ [ x and y are rounded individually before the arithmetic operation, percent error ]

[ x and y are truncated individually before the arithmetic operation, percent error ]

[ result is rounded after the arithmetic operation, percent error ]

[ result is truncated after the arithmetic operation, percent error ] ]

It just goes to show, rounding or truncating numbers before calculation may give results that aren't as accurate as one would like.  The following paper, "Rounding versus truncation estimates in difference calculations" by Leonard Van Wyk (see source) argues that sometime truncation is more accurate than rounding in subtraction problems.

Even and Odd Integers in Arithmetic

Even and Odd Integers in Arithmetic

Let n and m be integers, where:

An even integer is any integer that can evenly divided by 2, without remainder.  Hence, if p is an even integer, then p = 2 ∙ n

Adding two integers will result in an integer.

Multiplying two integers will result in an integer. 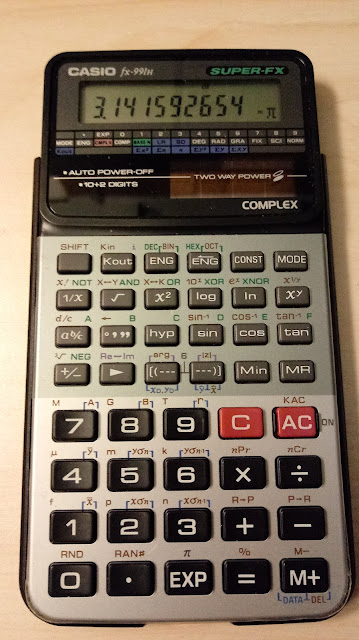 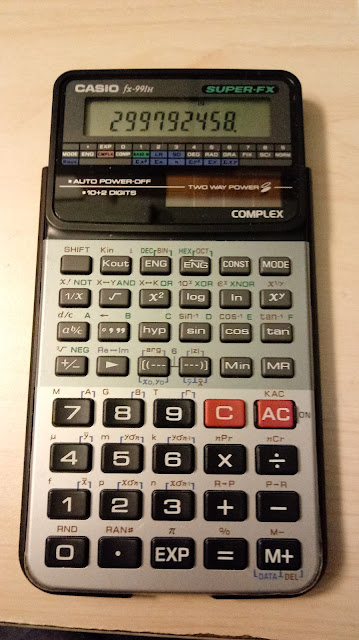 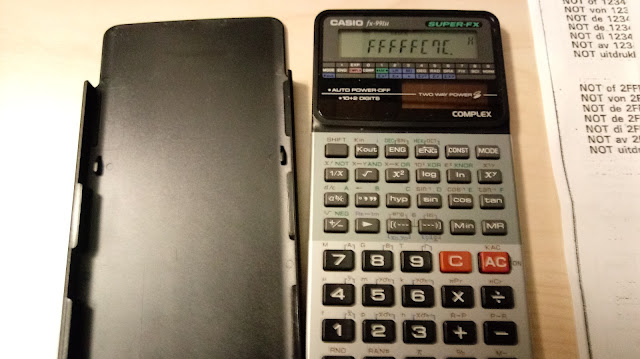 Battery:  Solar with battery back up (GR927)

The fx-991H works best when in full or almost full light.

* The fx-991H has a hard case cover instead of the pocket cover.  Personally, I like the hard case.

I also like the feel of the keyboard, I can feel definite clicks when I press the buttons.

Here is a quick run down what you get with the fx-991H:

*  Six additional registers through Kin/Kout.   Kin is the shifted command of the [ Kout ] key.  Storage arithmetic is permitted (yay!).  For registers 1 through 6:

*  Constant arithmetic.  To use it, the arithmetic key must be pressed twice.

*  Engineering Mode, where all answers are displayed in the form of x ee,

*  Decimal/DMS conversions.   Convert all numbers in DMS (degrees-minutes-seconds) to decimals before operating.

I checked with the manual to be sure that these are constants and it checks out.

I really like this keyboard.  It is clean and the keys are very responsive.  The display is sharp.   I am happy to add this calculator to the collection.  Prices vary, I think I got mine for about $13 U.S., but I have seen prices on the internet go as high as $40 U.S.

I like how Casio puts a lot of features and makes calculators more affordable.  This is a good brand to consider if you need to get the most bang for your buck.  You also get good quality of calculator.

We are going to use the approximation:

The two scripts presented in today's blog will make use of Python's built in commands input and eval, to allow the user to enter equations and expressions as inputs.

Using input itself defaults whatever is entered as a string.   If the string is an equation, it will allow for the eval command to evaluate the formula.

Using the eval-input combination will allow the user to enter numerical expressions as well as numbers.   This allows pi as an input, something I wasn't able to do with the float-input combination.

To allow for math functions including the use of π, I imported the standard math module.

You can download the app variables for the TI-84 Plus CE Python here:

The scripts are presented below. 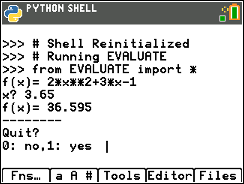 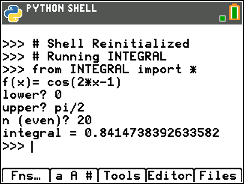 The eval command has opened up more possibilities,