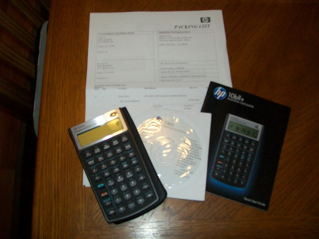 This is the review of the Hewlett Packard HP 10bii+ financial calculator.

The HP 10bii+ is a substantial upgrade to the HP 10bii. Hewlett Packard finally utilized the keyboard to its fullest, adding many functions such as depreciation, probability distribution calculations, bonds, expanded statistic capabilities, and depreciation just to name a few.

As for speed, I would state from the testing I did so far, the speed of the 10bii+ is pretty much on par with the 12c (two-battery edition) and the 30b.

The colors on the keyboard are nicer and brighter than its predecessors. I can actually see the blue shifted functions in all levels of light and angles. The keys are tactile and easy to push. No missed keystrokes during normal operation.

Thankfully, the HP 10bii+ it can take a spill and clean up easily, and no, I did not plan that. I was able to clean the calculator immediately and it works in perfect order.

The 10bii+ sports 20 memory registers: 0 through 9 and .0 through .9. Store arithmetic is provided, but not recall arithmetic. There is a dedicated M register with three keys dedicated to it: →M (store to M), RM, and M+. I really like this feature, which allows me to calculate a sum of a large amount of numbers. The M register has been a feature on the 10b series since the beginning.

One nit picky point, the STO function is still a shifted function (orange). Personally, I like STO to be a primary function (unshifted), but no big deal.

You can also recall mostly anything by first pressing RCL then the variable or storage register you want.

The 10bii+ offers to operating modes: Chain or Algebraic. Chain mode is obvious: any operations act immediately on the displayed number. Order of operations are ignored. The Algebraic mode is not of the "enter the entire expression and then press enter" type. For one argument functions, enter the number first then press the function.

I wish HP would have implement RPN (Reverse Polish Notation) mode - even if the mode just turned the left and right parenthesis into swap the x and y registers (x<>y) and roll the stack down one level (R↓), respectively.

The 10bii+ offers a last answer feature, which is new to the 10b series. The last answer is what was in the display when the equals key (or any key that finishes an operation, I think) was last pressed. The last answer can be accessed by pressing RCL =.

But there is a bug. While working the example on page 41 of the manual:

Here is how it was presented in the manual:

My guess is that pressing INPUT also loads the displayed number in the last answer register.

The 10bii+ presents two ways to work with two argument commands: use of the INPUT, and the direct, "in-line" way.

For those of you new to HP financial calculators, Chapter 5: Picturing Financial Problems and Chapter 6: Time Value of Money on the full manual provide an excellent introduction and a good set of practice problems regarding time value of money.

Calculations regarding cost, price, margin, and markup follow the model of the time value of money application. Enter the known information, then press the key of the desired variable to solve for it.

At first glance, it looks like the cash flow application was untouched. Not so. This application is updated - BIG TIME.

First we get not one, but two ways of entering repeated cash flows:

And the INPUT way, which I am a fan of:
Cash flow, INPUT key, frequency, CFj key

Next, like the time value of money registers, there is an all important clear cash flows sequence.

Third, when net present value (NPV) is calculated, you also calculate net future value (NFV). NFV is accessed by the SWAP function after NPV is calculated.

Finally, we can now review cash flows and their frequencies. This is done by simply pressing RCL CFj. Cash flows and frequencies can be reviewed, added, inserted, and deleted.

One of my favorite calculator features have finally made it to the 10bii+: date functions! Dates can be entered in U.S. Format (mm.ddyyyy) and International Format (dd.mmyyyy). Two functions are available: Days between Dates and Date Addition. For example, if today is April 21, 2011 - then I am alive a grand total of 12,456 days. :)

If you are familiar with the bond functions on the 12c, them you should at home with the 10bii+. There are separate storage registers for Settlement Date, Maturity Date, Coupon Rate, and Call Amount. You can calculate the price of the bond, yield to maturity, and the accrued interest. With many dedicated keys to bonds, you can keep track of what each variable contains.

The breakeven application is similar to the time value of money application. Enter amounts for the known variables then solve for the ones you want.

Straight Line, Sum of the Years Digits, and Declining Balance are available. Too bad declining balance with crossover is not (for calculating depreciation for tax purposes). The depreciation functions use the time value of money variables:

The depreciation functions calculate the year's depreciation, and the remaining book value. The functions only work in whole years - meaning you will not be able to set up the first month. If you want to work with non-integers (say the asset has 5 1/2 years), you can calculate the first five years, but the calculating the sixth year returns 0. A possible work around in this Case is to use the remaining book value from year 5 as the 6th (and final) year of depreciation.

The statistics application is similar to the cash flow application. You can review entries and edit them, there is a clear data points sequence, and you can easily find the most common statistics measurements (mean, deviation, sums).

The variables m, b, and the correlation coefficient (r) can be found by pressing the orange shift, the appropriate key, the orange shift key again, and then swap. The 10bii+ also features best fit (Regression 0). However, to find which regression fit the data points better, you will have to attempt to either predict x or y, or calculate a weighted average. One thing that can be improved is that the 10bii+ actually stating the best fit when it is activated.

* A well written full manual, which is available on CD or online. Now if the writers finish the last example in Chapter 13...
* The ability to review and edit cash flows and data points.
* Distribution functions and the fact that the factorial function coves real numbers
* Date functions, bonds, and depreciation have been added
* Unlike the 30b, you don't have to dig through menus to find functions, everything for the most part is on the keyboard

* RPN mode
* When best fit mode is activated, you are told what regression model is selected without having to calculate a prediction first
* A better case, something similar to the one used for the 17bii+
* A "K" indicator when the constant function is used

* Page 41: RCL = does not work (well) after pressing INPUT
* Page 119: the paragraph comparing standard deviation and population deviation is repeated four times on this page
* Page 154: net future value example is not complete

I would recommend purchasing the 10bii+. It is a very solid calculator good for the entry level while having a lot of easy to use finance applications. Hewlett Packard has stepped up their game by updating the 10b series.

Swiss Micros DM16L: Advanced Boolean and Factorial (up to 20)