I am at the HHC 12 conference. It is an annual conference for Hewlett Packard Calculator enthusiasts, held every September. This has been my fourth conference I attended. Everyone that I meet at the conference is super. I love going to these conferences. Here is a summary of went on during the 13-plus hour day, which honestly, went by amazingly fast.

Before the conference started, I was privileged to purchase a HP 32s II calculator from Bob Patton. A picture of it is shown below. The HP 32s II is a highly sought RPN programmable calculator that was in production during most of the 1990s. 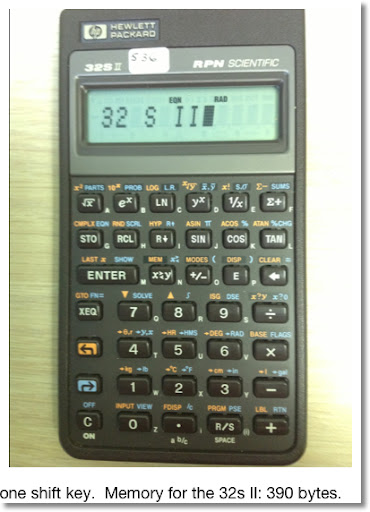 Today's conference started at the bright and early time at 8:15 AM. Here is a short summary:

"WP-34S and the HP Calculator Way" - Jake Schwartz:
* In the 1970s, Hewlett Packard (from here on in will be referred to as HP), was wowing calculator owners by constantly exceeding expectations. This due to the fact that handheld electronic calculators were relatively new.
* Around the time that the HP 49g+ was introduced in 2003, HP and calculator users crossed a point. Now, we users are suggesting more features to HP than HP has produced. This resulted in some users making home made calculators by repurposing them. For example, the HP 20B and 30b are repurposed to become a scientific programming calculator, the WP 34S, despite working with limitations of memory, manual keyboard labeling, and limited screen.
* Today, there is less documentation. Also calculators have been aimed towards certain niche markets, primarily education.

"Tablets vs. HP Calculators" - Gene Wright
* Of a poll of 41 attendees: 18 have tablets. 8 of the tablet have Apple tablets, including me. In fact, I write my blog with my iPad, using the Blogger+ app. 24 of 41 attendees use smart phones.
* We are going towards a digital world. Textbooks are now being converts to PDF files for use on tablets. The university I work for, Cal Poly Pomona, has just participated in an e-book pilot program.
* The majority of young students now have access to tablets and smartphones. A concern among teachers is the issue of cheating with these devices. That has not stopped some schools from standardizing tablet use, such as the iPad.
* There is a consensus that the use of stand alone technology, such as cameras, physical calculators, and GPS devices, is shrinking in favor of do-everything tablets.
* Jakie Woldering, a computer science professor at Cleveland State University, commented that we bring skills that will help us transition from one technology to the other.

"Calculator Root Finding: Scan Range Method" - Namir Shammas
* This program finds root, extrema (function minimums and maximums), and inflection points of f(x), using a Laguerre method.
* The user gives a domain to find points of interest of f(x) using a step size and other criteria.
* More information can be found here. Check under the HHC 2012 section.


"Measuring HP Calculator Current" - Richard Nelson
* Richard Nelson demonstrates how to find current and voltage of calculators in four states: off, during boot up, on stand by, and running a calculation. This allows us a way to determine if the keyboard and microprocessor are working.

"Calculating Before Calculators" - Palmer Hanson
* Palmer Hanson brought machines pre-dating handheld calculators. Among them were abacuses, slide rules of every kind, a circular percentage wheel, and a three-arm protractor used for navigation.

"The HP-41 is Alive and Well" - Warren Farrow
* Warren Farrow recounted his story about how he purchased the HP-41. He runs a website, www.hp41.org, a rich resource for the HP 41 calculator.

"Where Can You Find the History of Calculator Applications?" - Felix Gross
* Felix Gross shows that we have so much information regarding calculators including books, hardware manuals, journals, and application journals. However, the last category lacks an organized system of archive. The applications range from finance, cattle herd composition, optimizing factors for heat transfer, map projection, and education.
* The peak for calculator documentation occurred around 1977-1984.
* Today's resources include NASA.gov and eric.ed.gov.
* Currently, he is looking for articles concerning finance, engineering, and documentation in foreign languages.

"Re-tooling the Calculator Tool" - Pavneet Arora
* Pavneet Arora makes a case that we are not merging towards one do-everything tablet. On the filed, there is still a need for specialized and durable tools.
* Tablets are not the best for rugged conditions. A problem also is present on relying on only one tool, with the risk of failure. Multiple tools that can handle a similar function still serves a purpose. In my opinion, it is good to have a backup device.
* Arora favors the use of watches and belts that can be used on the arm. In addition, he states that a smaller Kindle Touch, with its e-ink screen, can serve as a multi-use rugged device due to its operating software. E-ink is preferred over back-lit devices.
* He stresses that tool design must be appropriate for working conditions.

Katie Wessman quilted a lovely calculator quilt that will be given as a door prize.

Gene Wright brought and show some of his non-HP (and non-TI) collection, which was really neat. Among the collection is Royal 99T Scientific Calculator (1976), Royal 94F Business Calculator (1976), Unitrex SC30, Unitrex 90SC RPN Calculator (had a 12 digit display which is unheard of in the 1970s), Canon Palmtronic F-7, and several Commodore models including the N-60 (navigation based), S-61 (geared towards statistics), and M-55, which he let me borrow for the night. The weirdest one was the Sanyo CZ-8008, which had only five scientific functions: sine, cosine, tangent, π, and square root. Yep, no inverse trig functions. Gene, who had the Commodore calculators, acquired most of the others calculators from Scott Reynolds.

"Converting HP-41C Programs to PDF" - Jakie Woldering
* Jakie Woldering described he was able to convert HP 41C programs from the calculator and classic journals to a modern format (PDF). This was done by using wands to read magnetic storage cards, a lot of typing, and conversion software.

"Even Larger Scaled Reptiles of the Nordic Countries" - Eric Smith
* Eric Smith updated progress on a calculator he and his group is making. The most significant update is a bigger capacity RAM chip which allows a more complex operating system.

The battery is rechargeable, and lasted up to three hours on a single charge. Amazingly, the manual can be found online. 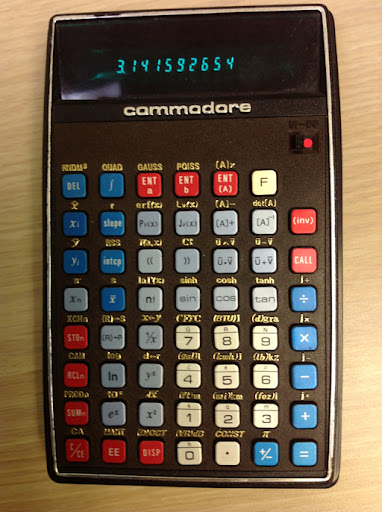