Here is what went on during Day 2 of the HHC Conference:

Wlodek Mier-Jedzejowicz - "Is It a Really Pathetic Name." (My apologizes in advance if I misspell the names)
* RPN (Reverse Polish Notation) came to be by Polish mathematician and logician Jan Łukasiewicz. Łukasiewicz was also a philosopher, teacher, and worked with multi-value logic.
* Mier-Jedzejowicz's family has connections with Łukasiewicz: he was a professor to several of his relatives.
* At the 10th Anniversary of the HPCC (based in Great Britian), Dr. William Wickes wrote an article in "RCL 20: People, Dreams, & HP Calculators" about the naming of RPN. Dr. Wickes was not too happy with the name (see the title for the hint).
* Although several alternative names were given, including "natural operating system". Mier-Jedzejowicz defended the RPN name.

Namir Shammas - "Variable Sampling Integration"
* The program has first written on the HP 41.
* The main difference is that the change in x (often labeled "h" or "Δx") is not constant. Where the intervals are placed depends on the slope of f(x). More intervals are placed when f(x) is changing quickly.
* Smaller areas are calculated using the area under a quadratic or cubic curve and then aggregated.
* In general, variable sample integration is more accurate than Simpson's rule when using cubic polynomials to calculate areas of sub-intervals. However, Simpson's rule is better when f(x) contains trigonometric functions.

Rick Furr - "The Making of the HPV2 Poster"
* Furr is an avid collector of calculators: over 1,000 of them. The collection includes Curta mechanical calculators.
* The HP calculator poster is an update to 2005 poster. I purchased one and will be posting a picture of it.
* Furr produced several posters: one covering a Cuerta machine and its hundreds of parts, the history of telephones, and the history of money, specifically greenbacks.
* The process of the new poster in a nutshell:
1. Take a picture of each calculator. Furr commented that inspection lights work best. Also take the picture away from the calculator and use the camera's zoom features.
2. Furr used the desktop publishing software Serif PagePlus x5 to plan the poster. This preferable to Photoshop since images can be scaled while the resolution is preserved.
3. Find data for each calculator and peripheral. This proved to be a challenge.
4. Use a printer that uses a stochastic printing process. The random grouping of the dots (cyan, magenta, yellow, black) allows for sharper printing.

As soon as I can will post a picture of the HP poster, probably when I get back home.

Jakie Waldering - Raspberry Pi
* Waldering showed the Raspberry Pi, a small computer that runs on Linux. How small is it? It can fit in your hand!
* Some specifications:
The computer boots from a 1G SD Card
The computer has an Ethernet port and two USB ports
It has an HDMI connection, so the computer can run on high-tech televisions
Graphics: 48 GPU Cores - screen refreshes at 40 to 50 screens per second
Does not get not after use - which was discovered after running a network of six Raspberry Pis ran a local network. The students were playing Quake 3.
This is a low cost device. Some assembly required.

More information about the Raspberry Pi can be found at:http://www.raspberrypi.org/faqs. This page contains links to suppliers if you want to purchase one. This is a nonprofit organization.

Final Thoughts
* I always have so such fun at the HHC conferences. If you get a chance, go. The HHC is an annual conference will be about 9/21/2013. Place to be determined.

I leave you with some pictures from the conference. 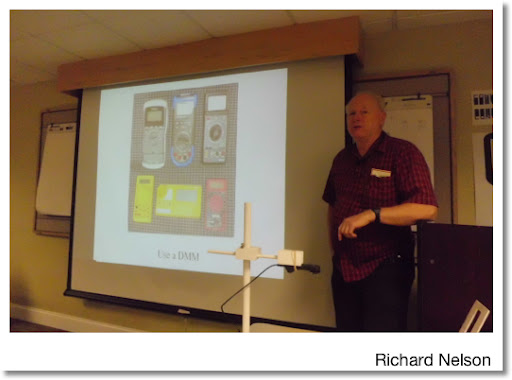 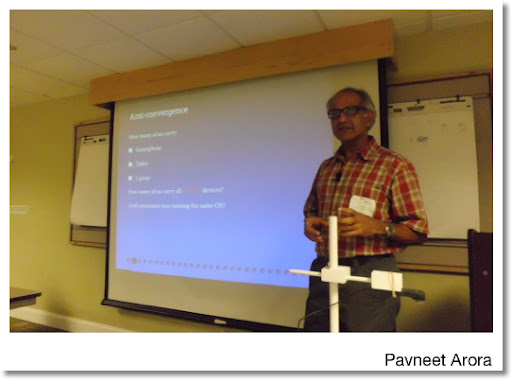 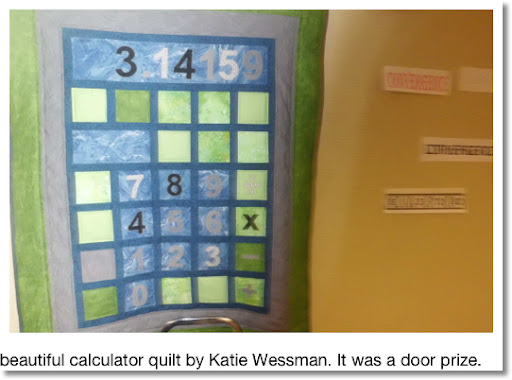 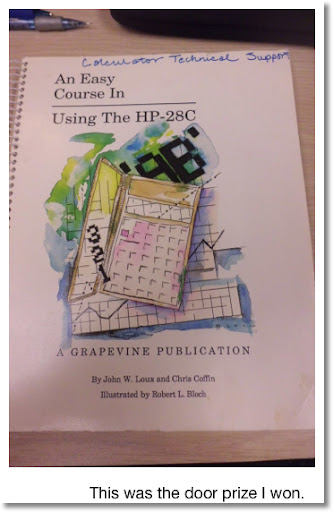 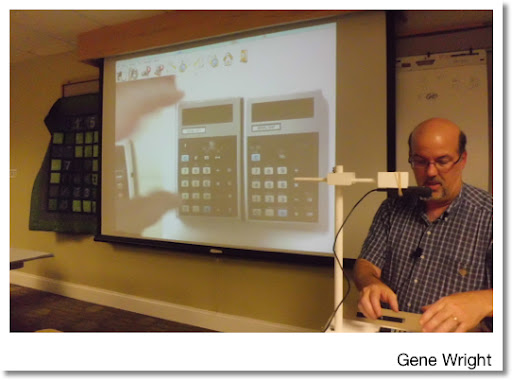 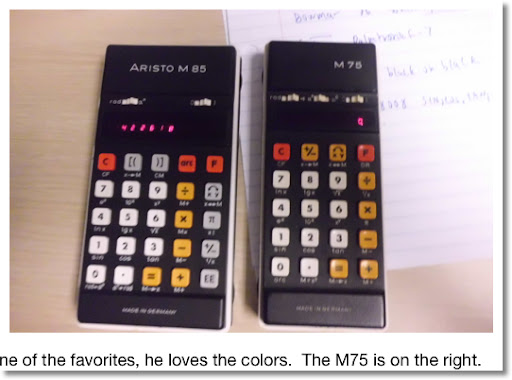 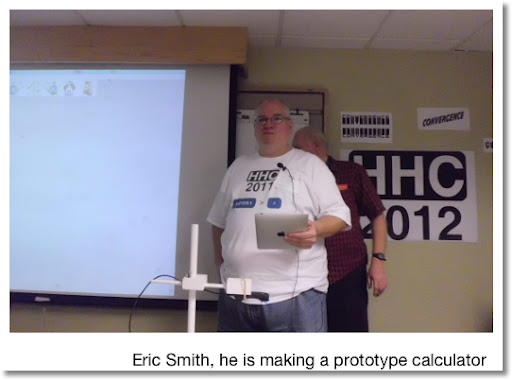 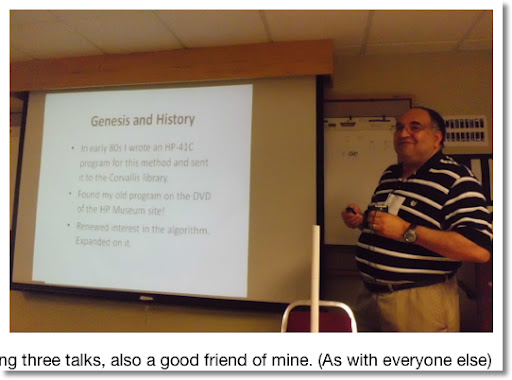 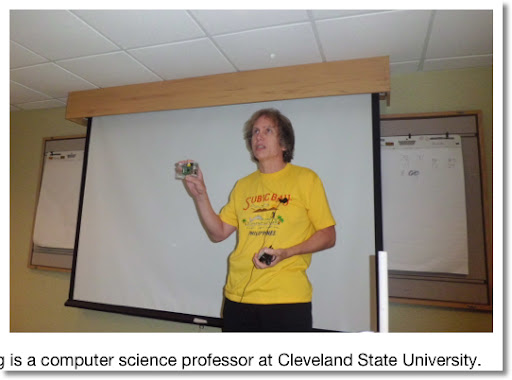 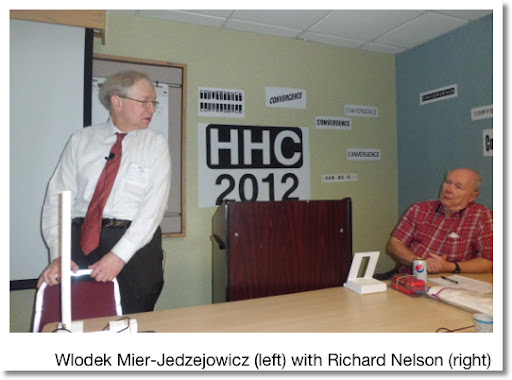 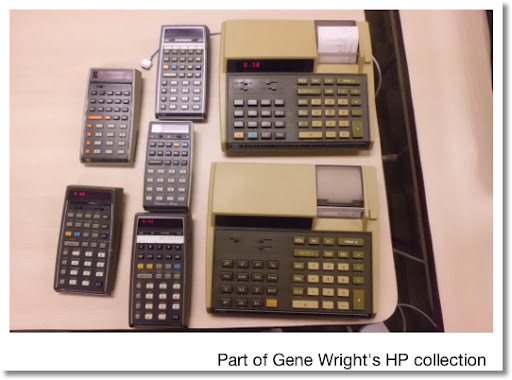 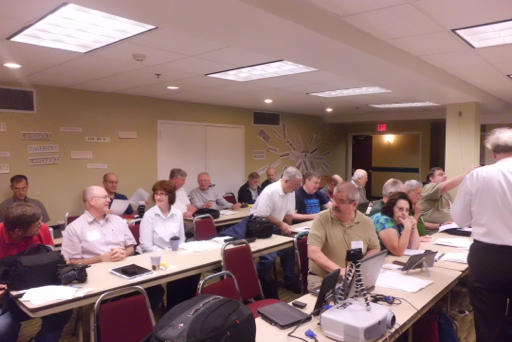 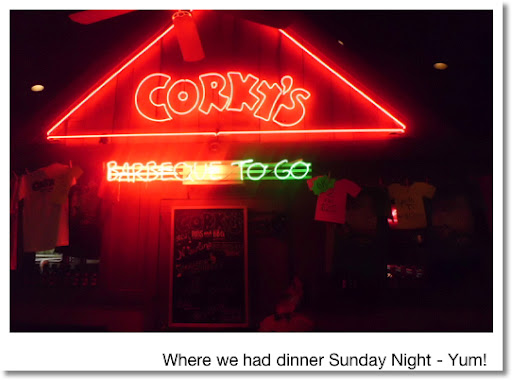 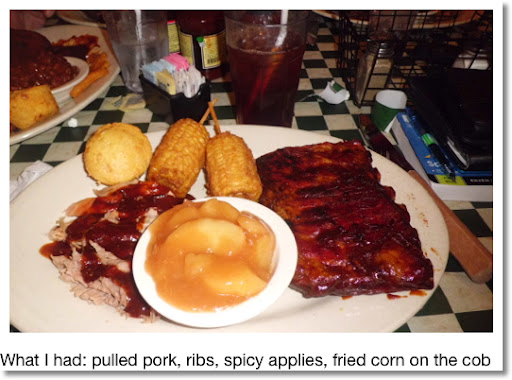 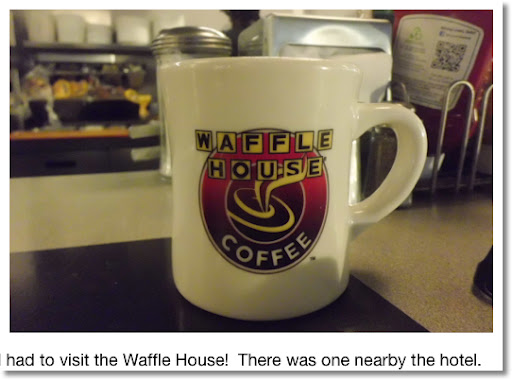