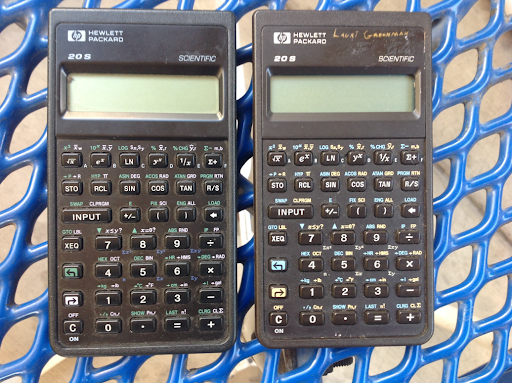 HP 20S:  On the left is the later keyboard, which has the dark green and pink shift buttons, the one on the right has the earlier keyboard with blue and orange keyboard.   The latter was given to me by Jason Foose and it is much appreciated!

As far as the programming is concerned, we get 99 steps with two tests: x≤y? (Hidden register ≥ display value? ) and x=0?, and unconditional transfers.   Six dedicated labels, A - F, are included.  A big feature with the HP 20S is that you can load six built in programs that are always available.   Just press [ left shift ], [ delete key ] (LOAD), to get access to:

The HP-20S was in production for over 15 years before ceasing production in 2003.

Thank you Jason Foose for the blue/orange keyboard.  :)