TI-30 SLR+ and Memories of School 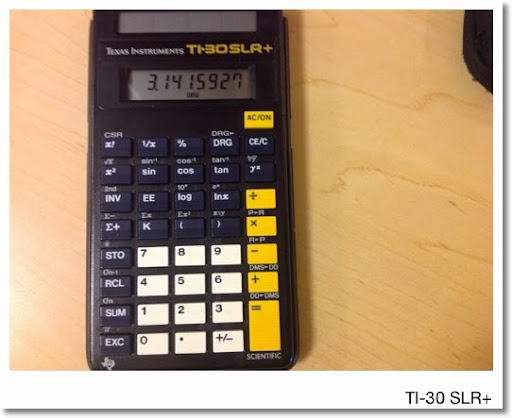 I sometimes like to visit pawn shops, because on an occasional basis, I find vintage calculators. Last weekend was a case when I found a Texas Instruments TI-30 SLR+ calculator at Arts Jewelry & Loan pawn shop in Whittier, CA. The keys, slide case, and the reference card are all kept in excellent condition!

The TI-30 SLR+ is probably the closest thing I have to the first Texas Instruments calculator, and second ever scientific calculator, I owned, the TI-30 Stat. This goes back to 1990, I think either in 7th or 8th grade. That is when I learned that "sin" stood for the sine function, not a religious transgression, and "log" had nothing to do with cutting trees.

The original TI-30 Stat was battery powered and practically never left me side. I must have read the manual hundreds of times. Unfortunately, I no longer have the TI-30 Stat, can't remember if I gave it away or it malfunctioned. For a picture of what my TI-30 looked like the datamath.net provides the picture: http://www.datamath.org/Sci/Modern/ZOOM_TI-30Stat_1992.htm

The TI-30 Stat I had turned out to be a later version, as the original version had the 2nd key marked as INV (inverse). I doubt any scientific calculator manufactured today has its modifier key marked INV.

The TI-30 SLR+ is a more advanced cousin of the TI-30 Stat. One of my high school math teacher had several of these.

According to their respective operating manuals, the TI-30 Stat stated that it had 54 functions, while the TI-30 SLR+ states that it has 63.

So far the difference between the two that I note, is that the TI-30 SLR+ has the nine following functions the TI 30 Stat didn't:

The TI-30 SLR+ and the miniature TI-25 Stat share the same function set.

Side note: To contrast, today, very few calculators are listed with a count of functions. I think Texas Instruments stopped counting the number of functions when the TI-85 was released in 1992.

This calculator is going to be awesome addition to the collection. Who knew 20-plus years later I would have a collection and have a blog about math and calculators? I didn't anticipate it in 1990. 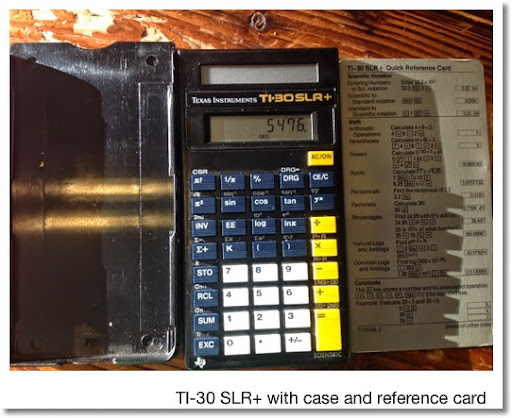