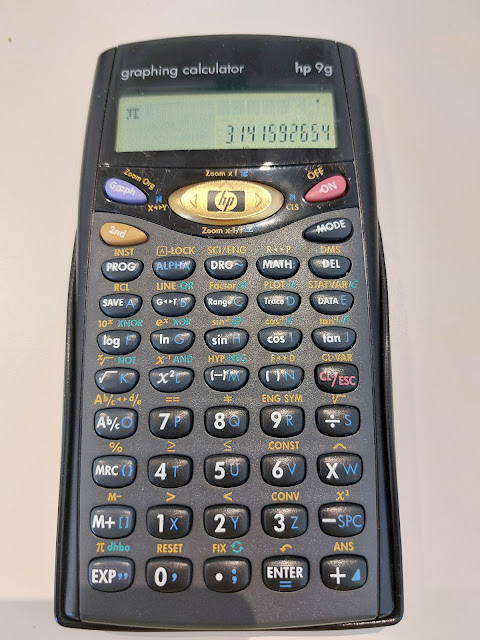 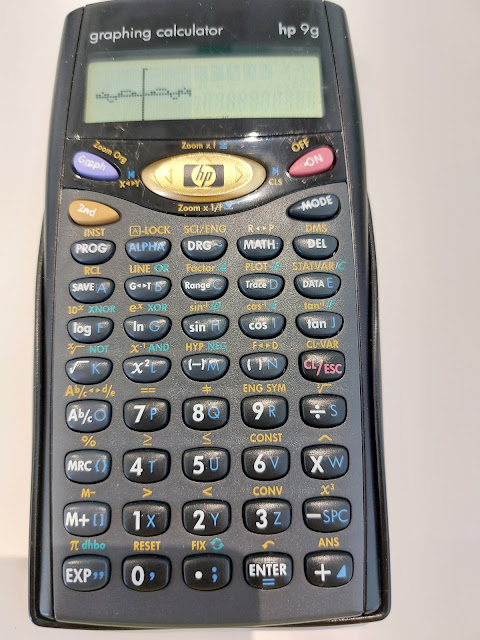 Logic:  Algebraic - type in expressions the way you write them

Memory:  400 bytes, but can be designated as additional memory registers

Memory Registers:  26, can be extended to 59 memory registers

The hp 9g is a small sized graphing calculator, similar to the Citizen SRP-325G and the Casio fx-6300g.  The 9g offers more features than the fx-6300g.

*  Maximum, minimum, sum, and average up to 10 numbers

*  Base conversions (decimal, binary, octal, hexadecimal) with Boolean logic (NOT, AND, OR, XOR, NXOR, NEG)

*  Function graphing, more than one function can be plotted on top of each other.

*  One and Two Variable Statistics

The percent (%) just divides the argument by 100.   For example:  58% converts the number to 0.58.   That is good for multiplying or dividing but not for direct addition and subtraction.

The [ 2nd ] [ ENTER ] brings back the last thing that has been cleared or deleted.  I don't think this brings back programs that have been deleted though.

Normal distribution is based on one-variable statistics.  The t value is based on data point a_x, which is entered in the DATA menu.  The t point is calculated with the formula:

Three areas can be calculated:

Q(t):  absolute value of the cumulative distribution between 0 and t

A very unique function, available to the 9G are process capability calculations.  Depending on the mode, the following can be calculated:

ppm = parts per million (One variable stat mode only)

See the User Manual for formulas.

At all prompts, to enter a new number, press [CL/ESC] first, very important.

The screen is split up in different sections.

There are two lines during calculations.  The top line shows what is being calculated, while the bottom line shows the results on the right hand of the screen, in a smaller font.

In program editing mode, we only get the top line as the bottom of the screen is taken by the two lines EDIT:  and *MAIN* (*DEC/HEX/OCT/BIN* for BASE-N programs).

In data input, only the top line shows the data points.

If you graph a function, the left side of the screen is the graph.  Pressing [ Trace ] will alternate between showing the x-coordinate and the y-coordinate.   Personally, I would like it better if both x and y were shown.   The small graph screen means that we really can't do much (no shading, no integration, have to arrow to approximate roots, but can draw lines and plot points).

Not perfect, but one of the best uses of a small graphics calculator screen.

The hp 9g has 400 steps that can be divided among 10 programs (P0 to P9).   Each program can either work in Main mode or Base mode.  Base mode programs are designated for base conversions and Boolean logic.

Some program commands include:

If-Then-Else structure.  The Else part is optional.

Pauses execution for seconds up to 105 seconds.

Swaps the values of variables A and B

Stops the program and shows immediate results.   Press [ = ] to continue.

Increase or decrease the variable by 1 after the expression is evaluated.

Increase or decrease the varaible by 1 before the epression is evaluated.

For loop that works more like a WHILE loop

The FOR loop is in C language.  This is the same syntax of the FOR equation editor command of the Plus42.

On tomorrow's blog I will have sample programs for the hp 9g.

I wish the hp 9g had better manuals or manuals that were formatted like a book instead of two large sheets.   But better than nothing and the documentation is detailed.

The biggest drawbacks are the lack of screen space and small amount of programming steps.  Despite this, the hp 9g is an underrated marvel and is very unique in a line of HP calculators.