Pies in the Face and Inelastic Collisions

Welcome to blog entry # 68 of my math and calculator blog!

Before I start, I dedicate this blog entry to pranksters, professional clowns (the ones whose job is it to bring laughs, not the annoying politician kind), Shane Jensen, Chris Brame, A.J. Burnett, the Texas Rangers, and the New York Yankees.

Today I am on the tail end of a nasty cold. The saying "laughter is the best medicine" and the beginning of the 2012 MLB baseball season reminds me of the good old "pie in the face" prank. Yes, I like baseball for a lot of reasons and I have grown to like the pieing prank as part of it.

This blog entry, I attempt to bring math, physics, and cream pies together. For those of you who expect a serious subject, my apologizes, but I am going for the silly side today.

Here is what typically happens when someone throws a pie in... a face. Disclaimer: I do not claim to be an artist by any means. 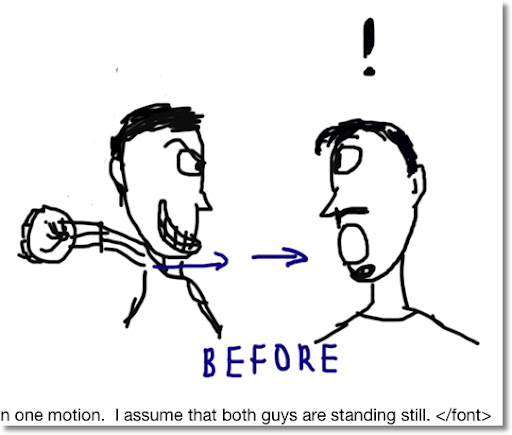 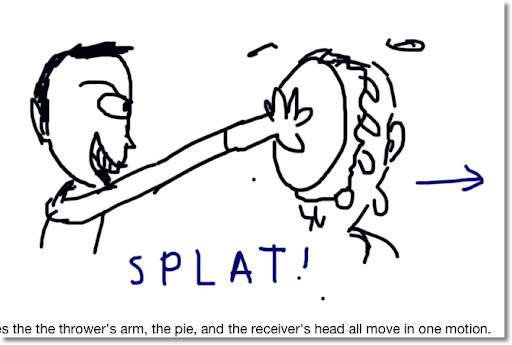 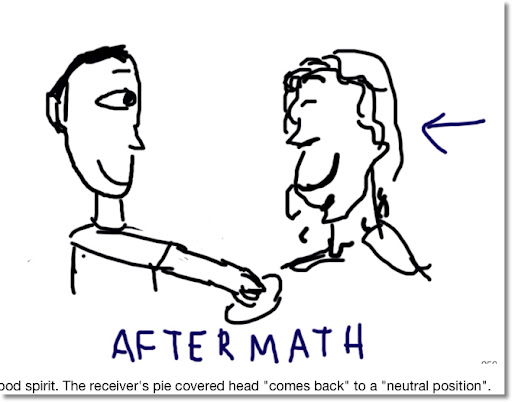 So I break the pie in the face into two stages:

1. Before to Splat
2. Splat to Aftermath

Since the pie sticks to the receiver's head, it is safe to say that the pie in the face row is an example of an inelastic collision. Momentum will be preserved but not kinetic energy.

m_arm = mass of the thrower's arm, which is about 6.5% of a human's weight according to Shirley A Kindrick, PhD of The Ohio State University.

m_head = mass of the receiver's head. It is approximately 8 to 12 pounds according to The Physics Factbook edited by Glenn Elert.

v_t = velocity of the arm throwing the pie

v_f = velocity of the arm, pie, and head after the contact

v_a = velocity of the pie covered head after contact

1. The entire pie in the face motion is done in one-dimension. That is, back and forth. The receiver is getting the pie head on at no angle.

2. In the Splat to Aftermath stage, the thrower's arm "falls" out of the picture, allowing the reciever's head to come back to neutral.

3. The amount of "pie" lost is negligible when the contact occurs.

4. To keep is problem simple, the thrower does not "smear" the pie over the receiver.

Before to Splat Stage:

v_a is negative since the head is moving "back" after the thrower releases his grip.

I am going to use US Customary units here:

A thrower, weighing 210 pounds is holding a 1.5 pound pie at 0.6 mph. He launches it on to his friend's face. His friends weights 220 pounds, assuming his head weights 10 pounds. What is the velocity of friends's head at contact and after contact? What is the kinetic energy at the competition of the two stages?

At the aftermath stage, the velocity of the pied head is 1.15931 ft/s (0.79044 mph) in the other direction, a small whiplash after pushing the friend back with that pie.

So this is an attempt to explain the physics of the pie in the face.

Thanks for reading as always. To Shane Jansen, Chris Brame and those who like pies in the face, I splat you with a virtual pie.

Swiss Micros DM16L: Advanced Boolean and Factorial (up to 20)