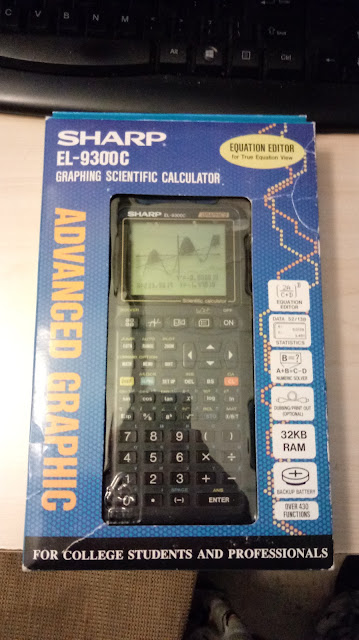 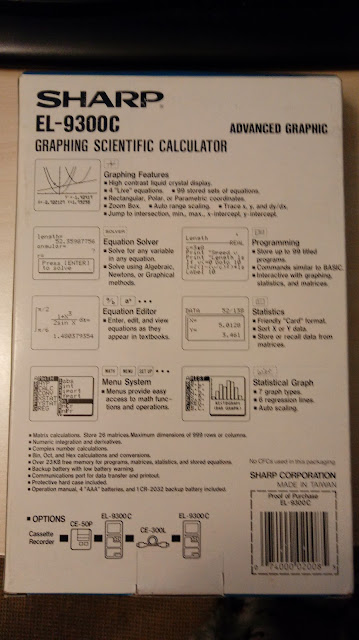 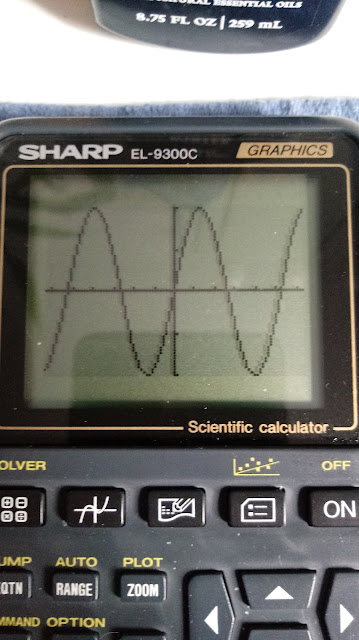 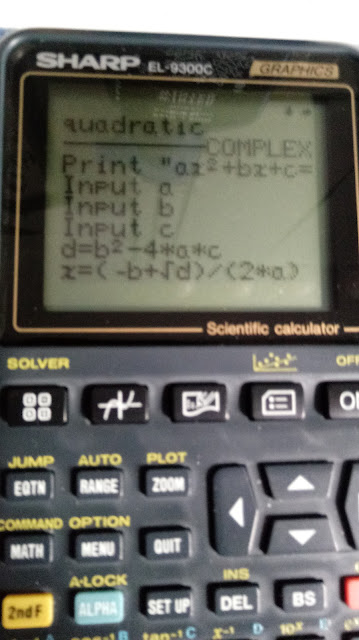 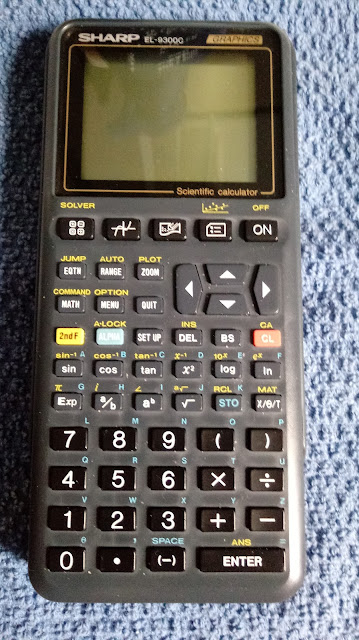 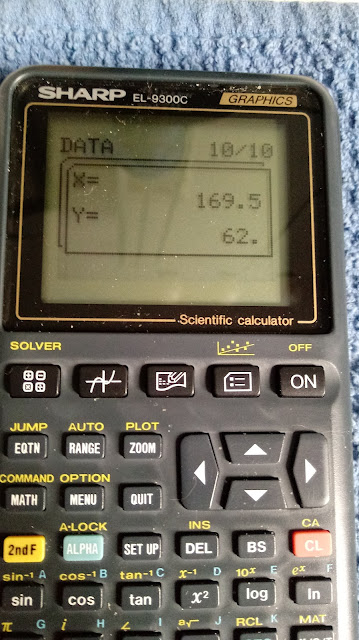 Comes with hard case.  The calculator I purchased came had in it's original box and manual.

*  Programming - up to 99 titled programs

The EL-9300C (and its graphing family) has a rich set of scientific functions including numerical calculus.  The calculus functions include numeric derivative and numeric integral.

The numeric derivative works on functions in terms of X using the standard definition of the derivative:

The numeric integral uses to commands:   ∫ and dx.   The dx must be attached to the end unless an error occurs.  The integral uses calculates the Simpson's Rule   The number of subdivisions can be entered.  It is an early graphing calculator, so expect the calculator to take a few seconds to calculate integrals.

Unfortunately, simplification of square roots and multiples of π are not included.   The EL-9300 still has fractions and fraction simplification.

For the time, the EL-9300 offers one most expansive set of pre-programmed calculations for complex numbers, which included logarithmic, power, exponential, trigonometric, and hyperbolic functions.  In trade, there the mantissa is 8 digits instead of the normal 10, and the complex mode is still separate.

Matrices are available, but they are in a separate mode.   Matrices are edited, created, and deleted through the MENU key, while called up by using the "mat" suffix through the MATH-E-1 keystrokes.

Base mode that allows logic operations for decimal, binary, hexadecimals, and octal integers are offered.

Regardless of display mode, all matrices are show by the matrix's columns.

The EL-9300C has three graphing modes, accessed through the SET UP menu.  If the calculator is in text mode, the function screen only displayed one equation at a time.  The graphing speed is fairly decent.

The solver is advanced, allowing for multi-character variables.  There are three methods:  Equation (where exact methods are used when available), Newton (using Newton's Method), and Graphic method.

Each equation can be saved and loaded into memory.

Note, the equation solver is not available on the EL-9200.

The programming model is a basic version of basic.  Like the Equation Solver, multi-character variables are allowed.   There is a basic set of graphing commands.  The Input command included an automatic prompt.  For example:

Input base  returned  base?

The automatic prompting will require getting used to.

Loops, both conditional and unconditional, are handled by the use of Goto and Label.

The mode (Real, Matrix, N-Base, Complex) must be determined prior to creating a program.  Unfortunately, I have no way to change the SET UP in the program, such as fix settings, angle mode, and coordinate/graphing mode, we have to keep this mind.

The statistics mode uses an index card interface.   There are four entry modes:

*  one variable with weights

There is a one set of data and it must be cleared through the Delete Data (or Delete All) through the OPTION menu.  Statistical data can be calculated and graphed.  The EL-9300C offers up to six regression models (see below), but unfortunately, they are only available in graphing mode:

In calculation mode, we only have linear regression.

One really cool feature of the Statistics mode, which will most likely not be able to found anywhere else is the ability to mask data.   A masked data point turns that data point "off", temporarily excluding the data point from calculation.

However, be prepared to use separate modes for matrices, complex numbers, and general calculations (real mode).   The lack of set up commands in program will provide a challenge, and have to be set prior to running the programs.

For the price, I find that the calculator is a good buy.

Numworks Update 17.2 - Highlights Update is available at: https://www.numworks.com/ The Numworks website will detect your calculator and wi...